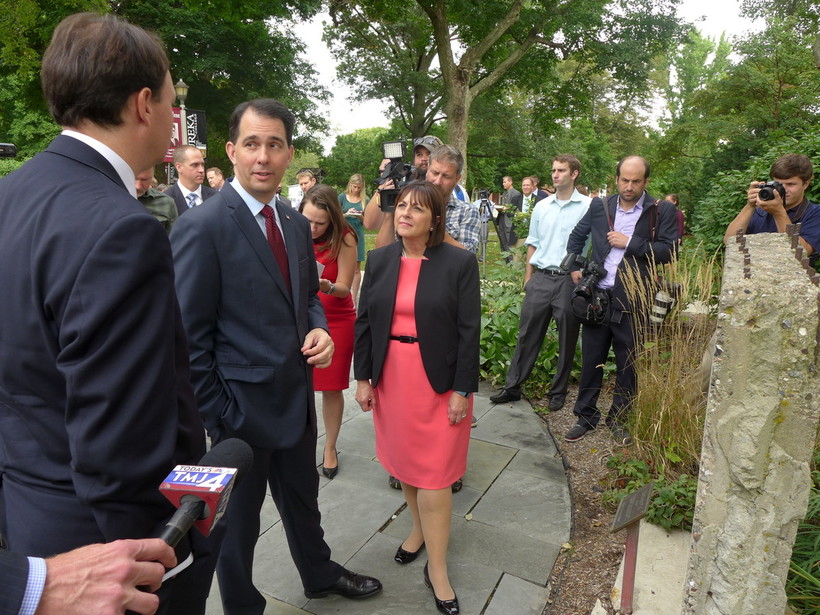 Gov. Scott Walker delivered a speech at President Ronald Reagan’s alma mater Thursday in an effort to reboot his struggling presidential campaign. During his remarks, Walker emphasized his battles with unions in Wisconsin and promised more of the same if he becomes president.

It’s hardly unusual for a Republican running for president to pay homage to Ronald Reagan. But Walker, perhaps more than most, is trying to portray himself as the Reagan of today.

"For me, Ronald Reagan is something special. Ronald Reagan helped shape my view of the world," Walker told a crowd of about 150 at Reagan’s own Eureka College in central Illinois.

Walker recalled that when Reagan fired the striking air traffic controllers early in his presidency, it sent a message to the world that he meant what he said:

"That opened the door to tremendous reforms, positive reforms for many years thereafter. He went big and he went bold, and it worked. It worked, I think about that often."

Walker said he did the same thing when he changed Wisconsin’s collective bargaining laws early in his first term as governor.  He promised similar action with federal employees if he becomes president.

"I’m going to stop the government from taking money out of the paychecks of federal employees for political union dues because I don’t think any worker in this country should be required to put money into a political fund that doesn’t support candidates that they support," he said.  "Why should you have to have money from your paycheck go to support somebody that you fundamentally oppose out there? That’s wrong."

Substantively speaking, that was the only new proposal in Walker’s speech. But stylistically, his remarks in Eureka marked a shift for Walker. Gone were the everyman elements from his oft-repeated stump speech, like the story about how he shops at Kohl’s. In their place was a heavy emphasis on Walker as a governor who gets things done.

Walker seemed to acknowledge the mood of Republican voters, whom opinion polls suggest have left him behind in favor of the rhetorical bomb-throwing Donald Trump and others who’ve never held public office.

"I think people are pretty cynical, and understandably so. But it’s not just about anger, it’s about urgency. Anger’s a negative thing, it causes people to check out and give up," Walker said.  "Instead, what I sense in America is a sense of urgency to say we need leaders to tell us what they’re going to do and have the confidence to actually do that."

Walker also hinted that he would be more engaged in the next presidential debate than he was in the first, when he hardly spoke and never addressed the GOP opponents standing next to him.

"See, between now and Wednesday, I’m going to challenge the candidates, all the other major candidates who are going to be on the stage with me at President Ronald Reagan’s library, I’m going to challenge all those other major candidates to say, 'You know it’s great to tell people you want to repeal Obamacare, but talk’s cheap!  Where’s your plan?  Have the courage to tell people what your plan is 'cause you cannot repeal Obamacare unless you’ve got a plan to do it,'" Walker said.

University of Wisconsin-Madison Political Science Professor Barry Burden said part of the reason Walker has fallen in the polls so sharply is because Donald Trump has effectively demoted the rest of the GOP field.

"The other thing I think that happened, though, is separate from Trump. And that is that Walker just hasn’t lived up to the high expectations that got built in when he started the campaign back in the spring," said Burden.

He said Walker has spent the last month or so chasing one constituency or another, causing some people to doubt his authenticity and his integrity as a candidate. Burden said the fundamentals of Walker’s campaign are sound, he just needs to get back to them.

Walker's day-one agenda and his-get-stuff done message had some fans in Eureka, Illinois Thursday. Betty Huschen of Roanoke, Illinois said the Washington establishment won't listen to Republican voters but she thinks Walker will.

"I kind of think he is an outsider, actually. He’s doing things that the establishment has not done for us. He’s done them in Wisconsin," said Huschen.

But Walker may have his work cut out for him to win back other Republicans.  While he gave this speech at tiny Eureka College for symbolic reasons, the small, sleepy crowd was a far cry from the thousands packing arenas to hear Trump. Walker has tried hard to brand himself as a battle-tested winner, but he's quickly learning what it feels like to run from behind.