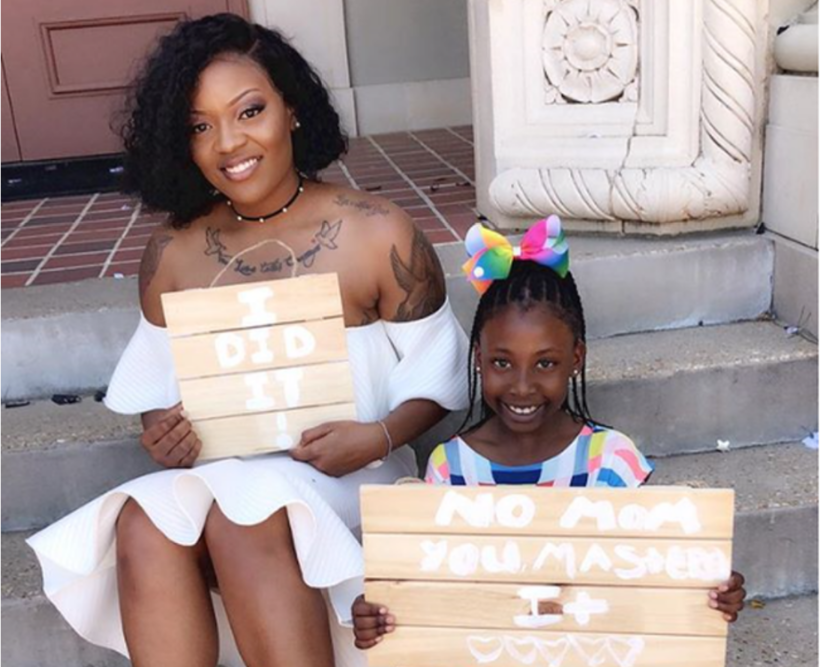 This mom graduated from Valdosta State University with her masters in public administration. Photo courtesy of BlackandHooded.com

Changing The Narrative Of Being Black And Hooded

On Twitter, L. Jameco McKenzie reintroduced himself after graduation with post-nominal letters M.Ed, after attaining a masters of education degree.

Twitter user Kojo is looking ahead to a doctorate degree in clinical psychology after attaining his masters.

And Taylor B. Rogers — an incoming PhD student at the University of California, Los Angeles — says her best is yet to come.

The masters of their prospective fields have joined other advanced academic graduates across the nation to celebrate their accomplishments on Twitter, with the hashtag #BlackandHooded.

The hashtag, which has since gained traction across the world and spurred offshoots including a website and scholarship fund, was created last year by University of Wisconsin-Madison alumni Anthony Wright and Brian Allen.

Wright said the hashtag symbolizes both replacing an undergraduate cap with a hood to denote graduate-level completion and the publicized death of Trayvon Martin, an unarmed 17-year-old who was wearing a hoodie when he was shot dead by George Zimmerman while walking home in Florida in 2012. Charged for murder, Zimmerman was later acquitted.

"That negative connotation that's associated with being black and in the hood is kind of what sparked our interest to change the negative narrative into a positive one," said Wright, who went on to earn his master's degree in higher education administration at Indiana University and works as a career adviser at the Wisconsin School of Business at UW-Madison. 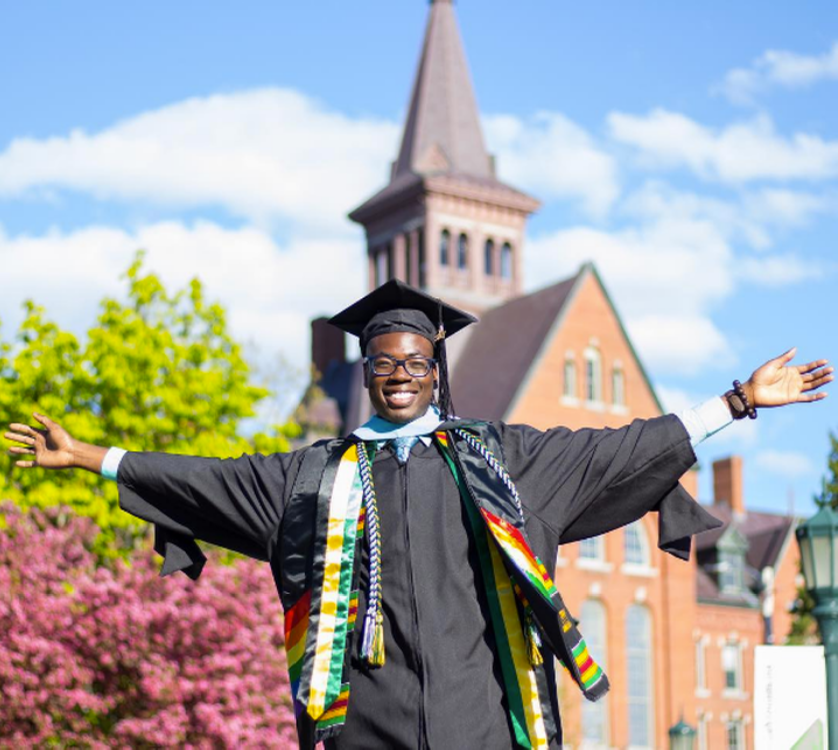 This graduate earned his masters in education from the University of Vermont. Photo courtesy of BlackandHooded.com

In an experience as a graduate assistant with a staff of undergraduate students, some of whom were black, Wright said he began thinking about the lack of representation for black students pursuing graduate degrees. The notion became especially clear after a conversation with one of his black female staff members, who told him she appreciated having him and other black students to look up to.

"I wanted to bring about representation for other people who are in a similar position as I was and as my student is or was at the time in order for them to kind of see more black graduate students and the programs that they were going into," he said.

Wright connected with his friend, Allen, who was in graduate school at Columbia University, to come up with the final version of #BlackandHooded.

Applauding the social media movement, Karen Butler-Purry said it "brings some visibility to the situation and says there are black students who are getting graduate degrees."

Butler-Purry, chair of the Council of Graduate Schools board of directors and associate vice provost for graduate studies at Texas A&M University, said she hopes such a movement will normalize the reality of more black students earning graduate degrees.

"Maybe through that, we can sort of generalize things and people ... will think it's more common and hopefully then students can start their programs with what many other students start with, which is essentially a clean slate and the opportunity to demonstrate what they can do there," she said.

"Many times when you are experiencing certain kinds of micro-aggressions or unconscious bias and other kinds of things, sometimes you need to be able to talk to someone when you don't have to explain to them that it's real because they can relate and know that it's real," she said.

Bulter-Purry pointed out the 5- to 7-percent discrepancy between the number of white versus black students who drop out of graduate degree programs, and said unconscious bias or the feeling of having to prove your worth could be affecting the larger dropout numbers for black students.

"If you are not able to persevere through that, then you actually could be doing well and may think, 'Well, this is not for me,'" she said.

Wright, too, noted the importance of having support and leadership from black students and faculty, which is one of the reasons he and Allen established a website for the cause. BlackandHooded.com serves as a network for black graduate students to connect with each other. Since February, the database has 378 graduates.

"BlackandHooded.com (is) for students or professionals who don't have those people in their lives that they can reach out to," Wright said.

The website also links to more information about the scholarship, which has been set up to help mitigate financial burdens that affect many graduate students. In the 2018-19 school year, six $500 scholarships will be awarded.