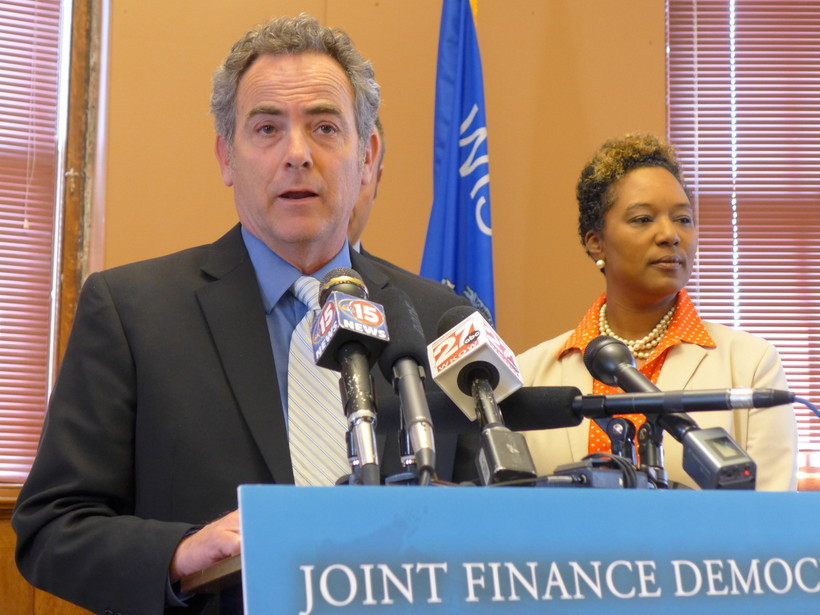 Sen. Jon Erpenbach, who sits on the Joint Finance Committee, said Tuesday that there was no need to change the structure of the retirement system committee. Shawn Johnson/WPR

Provision Would Have Put Lawmakers Entirely In Control Of The Panel
By Bill Martens and Patty Murray
Share:

A proposal that would put lawmakers solely in charge of the committee that oversees the Wisconsin Retirement System has been dropped from the budget.

Sen. Majority Leader Scott Fitzgerald’s office confirmed the removal of the plan on Tuesday morning, and the Senate voted to remove the plan later that day.

The item was one of several that were passed by the Joint Finance Committee last Thursday in what was known as "motion 999."

The Joint Survey Committee on Retirement Systems is made up of six lawmakers and four others: an assistant attorney general, the commissioner of insurance, the administrative head of the WRS and a member of the public who is not enrolled in the system. The panel’s job is to make recommendations to the Legislature on changes to the WRS.

The now-scrapped proposal called for replacing the four non-legislators with lawmakers for a total of 10 lawmakers to monitor the committee.

Thursday’s package of budget additions had been passed by the finance committee on a party-line vote of 12-4. Among the four Democrats who opposed the changes was Sen. Jon Erpenbach of Middleton.

"Any time you remove the public or a public employee from something, you’re privatizing it," he said Tuesday.

Speaking about the WRS before Fitzgerald confirmed the plan would be removed, Erpenbach said that the existing structure of the retirement system committee "works fine," which is part of the reason why Wisconsin has the nation’s only fully funded pension system.

Under the motion 999 provision, the political party in power would control the retirement system committee, which Erpenbach said would lead to "uncertainty."

"Right now, the Republicans have the majority in both houses and we’ve seen attempts throughout the course of time during their majority to privatize some things," he said.

He cited voucher school expansion as an example.

Erpenbach added that he didn’t believe that privatization to the WRS would have happened immediately. Rather, he said it would have taken place down the road, once the committee’s structural changes were in place.

If the plan had gone through, critics were concerned that it would have put control of pension money in the hands of politicians.

"Tampering with the WRS in Wisconsin is a very big deal," said Roger Springman is with the group POWRS, or Protect Our Wisconsin Retirement Security. "Hundreds of thousands of people care about this thing. They either have direct interest in it themselves or their family members do."

Co-chairs of the Joint Finance Committee, Alberta Darling and John Nygren were not available for comment Tuesday on why the proposal was included in the budget.

The Assembly still needs to vote on the proposal's removal from the budget.

Also, this story has been updated to reflect a Senate vote on the measure.