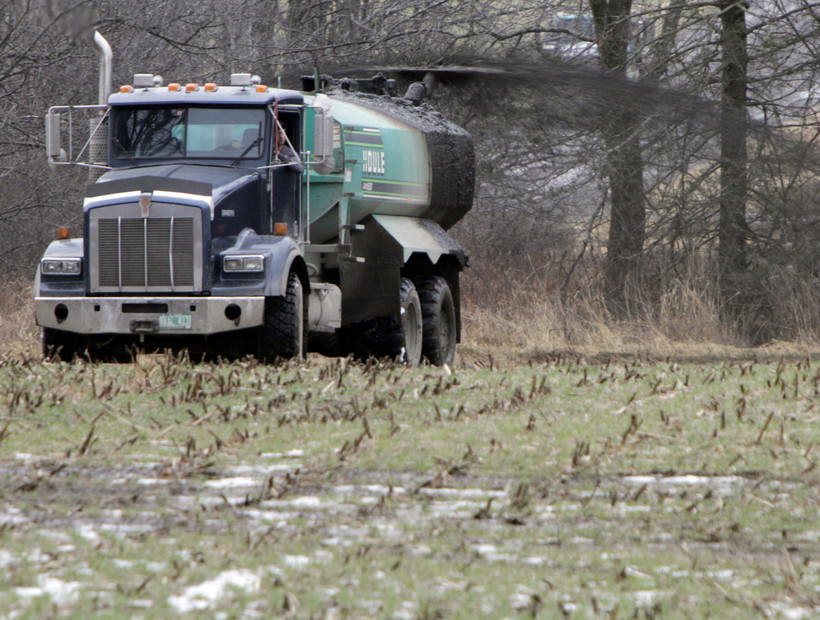 Changes To Manure Disposal Could Come To Northeastern Wisconsin Farms

For what may be the first time, the Wisconsin Department of Natural Resources is tailoring administrative rules to a particular geographical region.

The region in question runs from central Wisconsin to the tip of the Door County peninsula and is characterized by what geographers call karst topography. This type of landscape is created when water dissolves in rock, creating shallow topsoil and porous limestone bedrock. Contaminants, such as livestock manure, can easily leach into groundwater, polluting private wells.

Kewaunee County is in the heart of this region and more than 30 percent of wells in the area are compromised by waste.

Mary Ann Lowndes is the runoff management section chief in the DNR’s Bureau of Watershed Management. She said if approved, the proposed administrative rule change would restrict where large Confined Animal Feeding Operations, or CAFOs, could apply manure.

"The part that changes for CAFOs is two to five feet that are going to have more restrictions on them than they currently have," Lowndes said.

Some large farms receive federal government "cost sharing" grants that can help them finance things like manure pits. Any farm getting such grants would have to follow the new rules.

That’s a sticking point for the Wisconsin Dairy Business Association.

John Holevoet is a lobbyist with the group that represents large and small dairy farms around the state. Holevoet said there are a lot of farms in Wisconsin's karst region that — while they are not technically considered CAFOs — are still rather large, with upwards of 600 cows. Based on the new proposed rules, Holevoet said these farms would not have to comply with stricter rules.

"A big chunk of the animals in this area are living on farms that will not have to comply with this," said Holevoet.

Overall, Holevoet said WDBA is in favor of the proposed changes but that they could use some tweaking.

"All we're really saying is, 'that’s good, we should move toward making everyone do it,'" Holevoet said. "So I think we’re actually in agreement with what the DNR would probably like to see long term, although it probably will require a statutory change."

Ultimately any change will have to pass through the Wisconsin Natural Resources Board and the state Legislature before being signed by Gov. Scott Walker.

Some conservation groups are mostly in favor of the proposed changes.

While mostly supportive of the proposed changes, Dean Hoegger, president of Northeastern Wisconsin’s Clean Water Action Council, is concerned that the new rules may become a “one size fits all” scenario, where smaller farms would be held to the same standards as CAFOs. He said under current regulations farms with under 900 animals can spread liquid manure on soil of any depth. As written, he said the new proposal would hold those farms to the same standards as CAFOs.

"The CAFOs had to spread on no less than 24 inches. So there was a differentiation on the existing rule. There still is. We’re hoping to see that in the revisions for instance maybe three feet for Concentrated Animal Feeding Operations," Hoegger said.

The DNR will accept written comments on the proposed rule changes until Oct. 4.

Related Links:
http://dnr.wi.gov/news/input/documents/rules/WT1516PublicHearing.pdf
WisContext: What Karst Is, And How It Affects Wisconsin's Drinking Water