Wisconsin Had 9 Cases In 2018; None So Far This Year But There Are 11 Cases In 8 Other States
By Shamane Mills
Share:

A mysterious polio-like illness which sickened 233 people in 2018, including nine in Wisconsin, has struck 11 people in eight states so far this year.

Outbreaks of acute flaccid myelitis (AFM) have occurred every other year since first being tracked in 2014. Officials with the Centers for Disease Control and Prevention aren’t sure the muscle-weakening disease, which primarily affects children, will follow previous patterns. It usually occurs August through October.

"We don’t right now have an explanation for the every other year pattern and we really need to be ready," said CDC Deputy Director Anne Schuchat in a call with reporters Tuesday.

CDC officials are urging doctors to look for symptoms of muscle weakness, especially after a cold or fever, and get patients care quickly. Assessing the disease can be difficult to do because it’s so rare. There is no diagnostic test or specific treatment and health officials aren’t sure what causes it, although they are focusing on viruses, specifically enteroviruses.

It took nearly a year and a half before August McNall of Janesville was diagnosed with AFM.

"We got diagnoses but none of them were correct or they were very general," said his father, Grant McNall.

In 2016, 8-year-old August was at school when his hand stopped working and his arm felt funny. By the time his father got him to the ER 10 minutes away, he could barely walk. August was hospitalized for 60 days. He’s had physical therapy and last year had nerve transfer surgery in St. Louis to try and eventually restore muscle function. 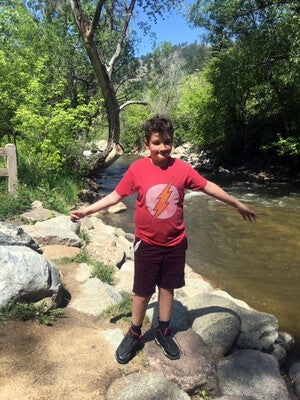 August McNall was hospitalized for 60 days in 2016 after being struck with AFM. This 2019 photo show McNall,11, in Boulder Colorado. He still has muscle weakness in parts of his body. Photo courtesy of the McNall family.

August still walks with a limp, his father said, and has lost use of his right tricep.

"One of our phrases that we use in our house is 'we just do.' People say 'How do you get over it?' We just do. 'How’s he play with his friends?' He just does," said Grant McNall.

A Milwaukee couple is slowly piecing their life back together after AFM struck last year shortly after their wedding. Adam Spoerri was hospitalized for more than six months and finally went home on Valentine’s Day of this year. A tracheostomy tube to help him breathe was removed a month ago.

"We went through a lot of incorrect diagnoses at the start because AFM wasn’t really looked at for in adults," said Bridget Spoerri. "I think the more public outreach that is done, the better the chance that people will be diagnosed right away.”

According to the CDC, 93 percent of the people who get AFM are children with the average age of five. Health officials don’t know why some develop the disease but most do not.

AFM affects the spinal cord, the part of the nervous system that carries messages to and from the brain. The chances of getting it are about 1 in a million.