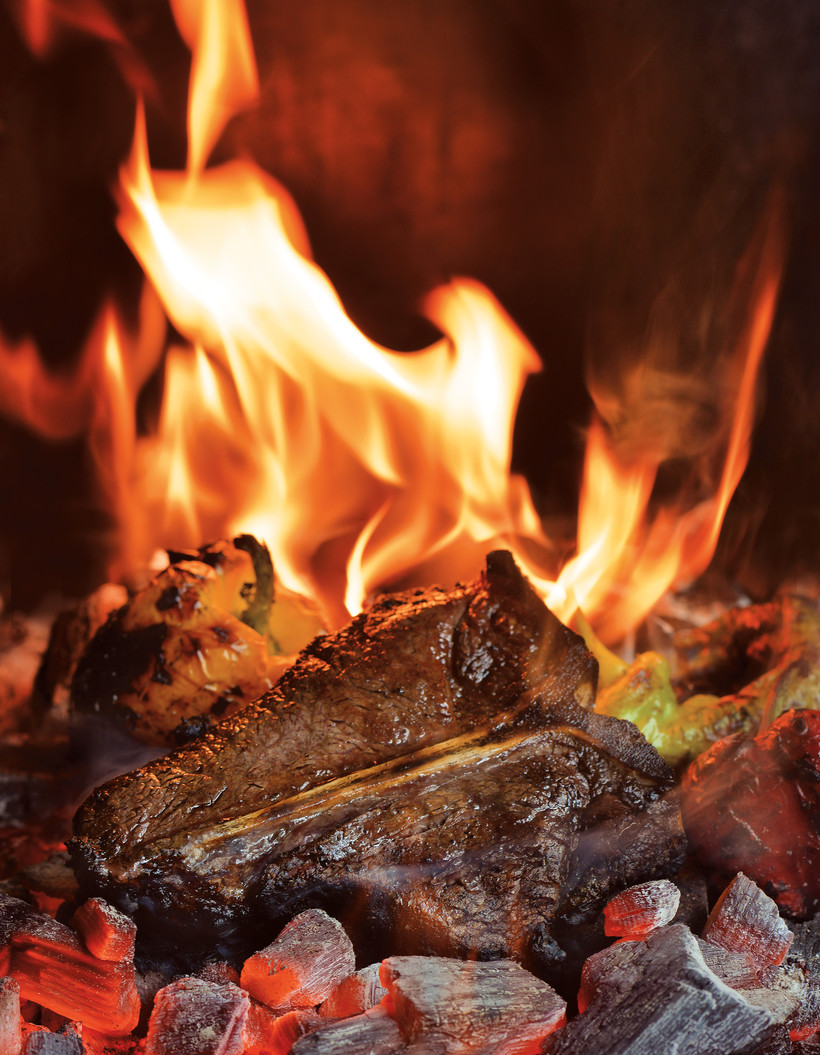 YIELD: Serves 2 and can be multiplied as desired

GRILL/GEAR: Sorry, gas grillers: You’ll need a charcoal grill for this one. (But see an interesting plancha variation at the end of the recipe.) You’ll want to use natural lump charcoal, not briquettes. You also need a grill hoe or garden hoe; newspaper for fanning the coals; long-handled tongs; heavy-duty grill gloves; and a 10-inch cast-iron skillet.

SHOP: Porterhouse is another of the “noble” steaks (i.e., strip, rib-eye, and filet mignon). It is comprised of both a piece of filet mignon and a strip steak, separated by a T-shaped bone.

INSIDER TIP: Grilling steak directly on the embers isn’t new, and it certainly isn’t limited to steak. But there’s something about laying a slab of beef on a red-hot bed of embers that astonishes, horrifies, and ultimately thrills in a way that no other grilling method can rival. And there’s more to the practice than mere theatrics: The strong but uneven heat, the micro-charring of the meat’s surface, and even the tiny bits of cinder add a texture and taste to a steak you simply can’t achieve by conventional grilling.

In 1953, an American general-turned-politician became the thirty-fourth president of the United States. We remember Dwight D. Eisenhower here, not for his great leadership or military genius, but for a singular method of grilling he brought to the White House. “He rubs the steak (a 4-inch-thick sirloin) with oil and garlic,” wrote a reporter from the Miami Daily News, one Mr. Byres, “then, as the horrified guests look on, casually flings the steak into the midst of the red and glowing coals.” Thus was born what I like to call “caveman” steak. (Steaks were no doubt grilled this way in prehistoric times, and likely have been ever since.) Ember-roasting gives you an exemplary crust and pronounced smoky flavor. To round out the taste, you’ll top the beef with a pan-fry of poblano and bell peppers—also cooked on the embers.

For the pepper hash

You can’t caveman a steak on a gas grill, but you can sear it on a fire-heated plancha or cast-iron skillet. You’ll achieve a savory crust quite unlike what you’d get with conventional grilling. It’s not the same as a caveman crust, but it’s remarkable nonetheless.

Set up your grill for plancha grilling following the instructions on page 28. Heat the plancha well (a few drops of water splashed on it will evaporate in 2 seconds). Oil and season the steak well and grill it on the plancha following the cooking times in Step 3, page 129.