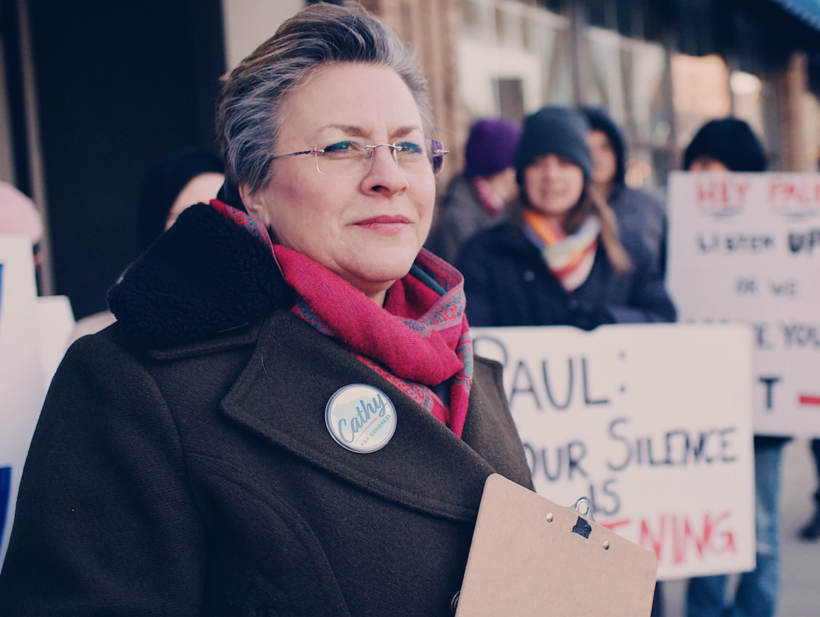 Cathy Myers is one of two Democratic candidates facing off in the Tuesday, Aug. 14 partisan primary to seek U.S. Rep. Paul Ryan's vacated seat in November.

Myers, a teacher, is competing head-to-head with ironworker Randy Bryce in a race for Wisconsin's 1st Congressional District that has a total of seven candidates. The Republican primary will include Jeremy Ryan, Paul Nehlen, Kevin Adam Steen, Bryan Steil and Nick Polce. The district covers a portion of southeastern Wisconsin that includes Janesville, Racine and Kenosha.

Rob Ferrett: Why are you running for this seat?

Cathy Myers: I'm running for Congress because I think that health care is a human right and I support Medicare for all.

As a teacher and a member of the Janesville School Board, I believe that we need to do everything we can to protect public education, especially from the likes of (U.S.) Secretary of Education Betsy DeVos and her voucher program. I also think that common sense gun reform must be on the table. I am really concerned about the dominance and threat to our students of gun violence.

We've lost the manufacturing base with the closure of GM and Chrysler. I believe the key to restoring our manufacturing is to tie us to the energy sector, specifically renewable and green energy jobs. I know that we would be able to start with revamping our manufacturing and improve the number of jobs through installation and service.

RF: What about your background prepares you to be a representative in Congress?

CM: As a school board member, I have examined budgets, I've built coalitions and I've brought around reforms. We've been able to protect benefits for teachers in the Janesville school system and increase salaries. Most importantly, we stopped the tide of teachers leaving the district. They were leaving in droves right after Act 10. We have stabilized the Janesville district.

RF: How do you think Paul Ryan has served the district?

RF: What are your thoughts on immigration?

CM: I believe that the Dreamers need a path to citizenship. I think the separation of the families at the border was unconscionable. It was cruel and it was a choice that didn't have to happen. We needed to send federal judges, immigration judges down there to help process those claims and to let the system work the way that it's supposed to. We need to take (U.S. Immigration and Customs Enforcement), which has become a rogue agency, and put it back under the Justice Department. It needs a lot of oversight and needs to follow the rule of law.

RF: What are your views on education?

CM: We need to stop the expansion of the voucher program. It takes local money out of local communities and sends it elsewhere. It's your tax dollars being sent out of the area to places and people that are not accountable to you and to your tax dollars. It is also an attempt to starve out public education and turn education into something that is only for the elite.

We need a lot of partnerships between schools, technical colleges and community colleges. We need to make sure that students with student loan debt can refinance and discharge it in bankruptcy if they have to. We could also prevent them from having so much debt by offering free public college and also by increasing things like Pell Grants and truly investing in education.

Also we need to have free universal pre-kindergarten. The investment that we make there will save us a lot of money and also improve the chances for especially low-income students to thrive.