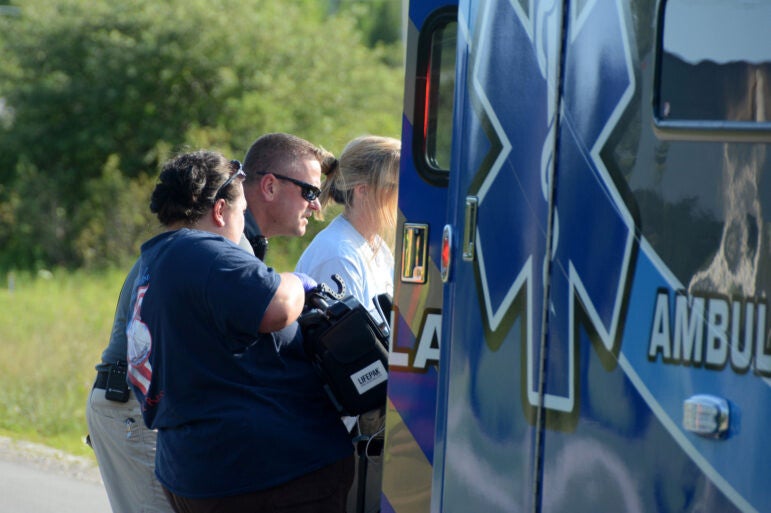 Aaron LeClair, emergency services director for Door County, Wis., says his service is responding to calls as though there is community spread of the new coronavirus, including increased use of personal protective equipment. Here, he responds to a call in July 2019. Photo courtesy of Tad Dukehart

The reality of the COVID-19 pandemic struck Rob Puls on March 19, when Bayfield County confirmed its first positive case of the virus.

Puls coordinates paramedics for Great Divide Ambulance, which staffs four ambulances around the clock in the 15,000-person county that hugs Lake Superior. The four vehicles cover around 730 square miles, an area three times the size of Chicago.

"I think everybody up here was shocked, because they thought we were rural and removed," Puls said of the positive test, the first of the county’s three confirmed COVID-19 cases so far. 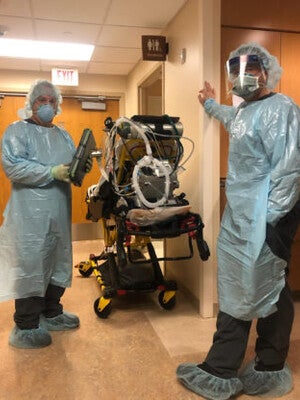 Great Divide Ambulance crew providers Taylor Heinzel, left, and Patrick Rogers who work in Bayfield County, Wis., are seen here in their personal protective equipment. The crews now wear gloves and a face mask to every call. And when a patient has COVID-19 symptoms, they additionally don N-95 respirators, gowns and face shields. Photo courtesy of Rob Puls

Like other health care and essential workers, Puls’ crews have beefed up their use of personal protective equipment (PPE) as they try to stay safe during the pandemic. They now wear gloves and a face mask to every call. And when a patient has COVID-19 symptoms, they don N-95 respirators, gowns and face shields.

But most PPE is designed for temporary use, and replenishing those crucial supplies has proved incredibly difficult. When Puls called his supplier early in the pandemic, no one answered the phone.

"It just kept ringing," he said. "They were inundated."

And now? He hears an automated message along the lines of: "Don't even ask us for protective equipment, because we have none."

Dozens of hospitals have less than a week of PPE on hand, according to the Wisconsin Hospital Association. The state Department of Health Services has issued guidance on conserving supplies, saying it "expects continued PPE shortages."

Unlike cities, which have full-time emergency medical responders on staff at the local fire department, Wisconsin’s rural emergency services typically rely on a patchwork of funding sources and volunteer labor. These rural services face particular challenges in paying for these crucial supplies — when they can find them.

WPR and Wisconsin Watch spoke to six rural Wisconsin emergency medical service providers who called the PPE shortage a top hurdle in responding to the pandemic. The departments are using creative solutions to find the gear, sometimes exhausting their tiny budgets once they do.

Wisconsin has received some outside help with equipment. In addition to a call out soliciting PPE, the state procured two shipments from the Strategic National Stockpile to distribute locally. Those include roughly 404,000 face and surgical masks, 248,000 pairs of gloves, 165,000 N-95 respirators, 79,000 face shields, 41,000 surgical gowns and 192 coveralls. A third shipment is on the way.

But it’s not enough.

"We’ve tried every vendor that we use. We’ve searched the internet. We’ve applied for supplies from the (national stockpile)," said Ryan Olson, director of ambulance services in the Barron County city of Chetek, population 2,100. 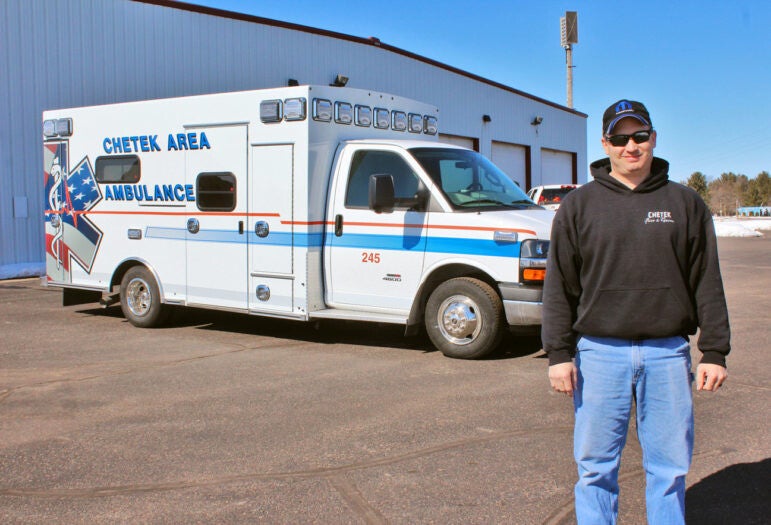 Ryan Olson is director of ambulance services in the Barron County city of Chetek, Wis. He is among several EMS workers in rural Wisconsin who say obtaining protective gear during the coronavirus pandemic is incredibly difficult. "We’ve tried every vendor that we use. We’ve searched the internet. We’ve applied for supplies from the (national stockpile)," he said. Carl Cooley/Chetek Alert

Help From Auto Shops, The Public

Wisconsin requires local governments of a certain size to offer fire services, but there is no requirement they provide emergency medical services. Volunteers make up nearly 40 percent of Wisconsin’s emergency medical workforce, and "almost all rural services rely on volunteers to some degree," a DHS spokesperson said.

Every rural EMS "struggles with staffing to begin with," said Jim Aanstad, fire and ambulance chief of Iola, a village in Waupaca County that is home to three confirmed COVID-19 cases and one death. "You take four or five key people out of your roster, and you’re hurting big time."

Volunteers run Iola’s ambulance service, which covers seven municipalities. They are paid, but very little. Even Aanstad has another job.

"If I don’t keep my people healthy, we’re not going to have anybody to respond to a call," he said.

That is why obtaining protective gear is crucial. But departments struggle to bear the costs even when they manage to find the supplies. Many of Wisconsin’s emergency departments rely heavily on spaghetti suppers, pancake breakfasts and other unsteady funding sources, said Marc Cohen, executive director of the Wisconsin EMS Association. The finances of rural departments are particularly precarious.

The needs for PPE and other pandemic-related items are adding more than $20 to the cost of each ambulance response, Cohen wrote to Evers in an April 3 letter.

The letter — also signed by statewide ambulance, fire chief and firefighter groups — asked Evers to increase the rate at which the Wisconsin Medicaid program reimburses departments for EMS services. The rate was last boosted in 2008.

"The dollars that (EMS departments get) don’t even come close to the cost of pulling the ambulance out of the station," Cohen said in an interview.

Evers’ office did not immediately respond to a query. Evers has, however, sought other ways to help EMS providers. On April 3, he issued an emergency order suspending certain regulations surrounding the staffing and credentialing of EMS workers. Evers aimed to add flexibility, allowing Wisconsin to more quickly expand its medical workforce.

Aanstad said he has already spent a year’s worth of money on PPE in the past three weeks. And with his usual suppliers overwhelmed with requests, Aanstad has turned to auto supply stores to find N-95 respirators. His crews are trying to minimize their use of PPE, including by limiting contact with patients. But that’s not always possible.

Aanstad is not sure how long his current supply would last — perhaps several weeks or a couple of months.

"It all depends on how things hit us here," he said.

Other EMS departments are ordering protective gear from auto suppliers, too.

But Olson said in Barron County, which has now detected six coronavirus cases, the need for EMS could "quickly rise." 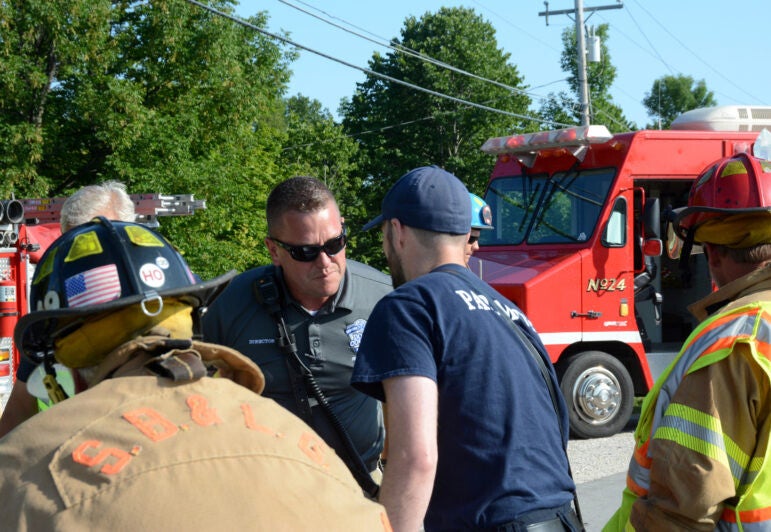 Aaron LeClair, emergency services director for Door County, Wis., says his Door County service is implementing new cleaning measures for trucks, equipment and the workers themselves after shifts. Here, he is seen responding to an emergency call in July 2019. Photo courtesy of Tad Dukehart

Rural EMS providers say they are concerned about spreading COVID-19 to their families.

Carothers’ boss requested she not share the name of her provider.

"We don’t want to create more panic than we already have," Carothers said.

Carothers described extraordinary lengths to prevent the coronavirus from entering her household. That begins at the station, where she is able to shower and change clothes after responding to a call. Once home, she puts her clothes in a plastic bag in a backyard shed, and heads straight to the shower, she said. She later washes the clothes, destroys the plastic bag and disinfects her truck.

LeClair said his Door County service is implementing new cleaning measures for trucks, equipment and the workers themselves after shifts.

Puls, the Bayfield County paramedics coordinator, said he has redesigned life inside his home to keep his partner virus-free. They now use separate bedrooms and bathrooms, and tape on the kitchen floor marks his partner’s safe zone for cooking.

"This is enormous. This is bigger than any single event that we’ve ever taken on," he said. "I think that’s true for all the ambulance services in the state."

Fear of the unknown makes responding to the pandemic tougher, Puls said. But talking about that fear can help conquer it.

"Fear can become crippling and our group here, the ambulance service, we don't want to be crippled. We want to be on our game, ready to go," he said. "That's what we're here for."