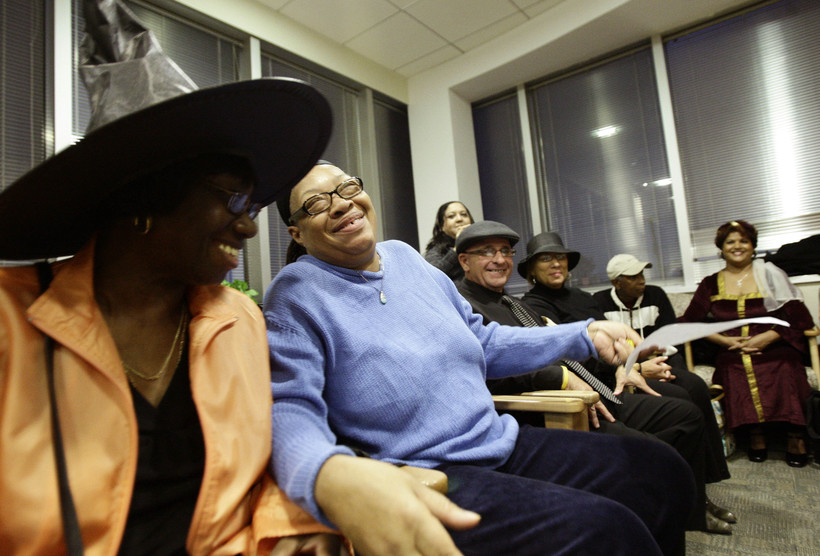 A Case For Laughter, Even When Times Get Tough

Sometimes, laughter is taboo. It's not appropriate to laugh at a funeral. A work meeting. A solemn lecture. Bad news at the doctor’s office.

But when times get tough, laughter can also help make light of those situations.

"Humor serves a purpose, not just in how we live our lives, but how we heal from certain trauma," explained Jameca Falconer, a licensed psychologist who blogs at PsychCentral. "A person that is able to find humor in a variety of situations is a person that can usually recover a lot better from trauma and from unpleasant situations just because of their perspective."

As a psychologist, Falconer often sees people at their worst times, battling depression, anxiety, and harsh life events like divorce and loss of a loved one.

She has found laughter can be a way to connect with them, to cut through the sadness.

"I see people that come in for very sad things," she said. "And it’s not always very easy for them to laugh at that particular incident. But usually there are some indirect pieces of that that are humorous."

Sometimes, people will laugh at the last-straw event that forced them to come get help.

"There are different ways to make light of that," she said.

The old cliche that "laughter is the best medicine" isn’t too far from the truth. A 2005 study from the University of Maryland found that laughter was linked to healthy blood vessels, which improves cardiovascular function.

A 2014 Loma Linda University study found that laughter therapy can improve memory in older adults. That’s because laughter is known to reduce cortisol, a stress hormone. Too much cortisol can damage brain neurons and impair memory.

Beyond the actual medical benefits, laughter can be a useful communication tool. Falconer recalled the time her young son spent in a children’s hospital in St. Louis.

"It seemed that the nurses that had the best bedside manner and the ability to connect with the children were the ones that were able to laugh a little," she said.

Of course, part of humor is knowing what’s ok to say and when. It’s still important not to cross the line, Falconer said. Truly funny people know the right time to execute a joke, and what’s not ok to say at all.

"I think there is a very fine line with that — what is not prejudicial," she said. "A confident person will feel the audience out. They will figure out what will be appropriate in that context."

Some studies suggest that funny people are better liked and more successful — both in the workplace and out of the office. It’s a behavior people want to emulate, but unfortunately, it’s difficult to learn, Falconer said.

"It’s a really innate personality trait," she said. "If your parents are funny people, then more than likely you’ll be funny."

The best way to learn is to think of it like any other skill you’d want to pick up. If you want to learn business, you hang around businesspeople.

"In the same way, you would surround yourself with people that are funny," she said.