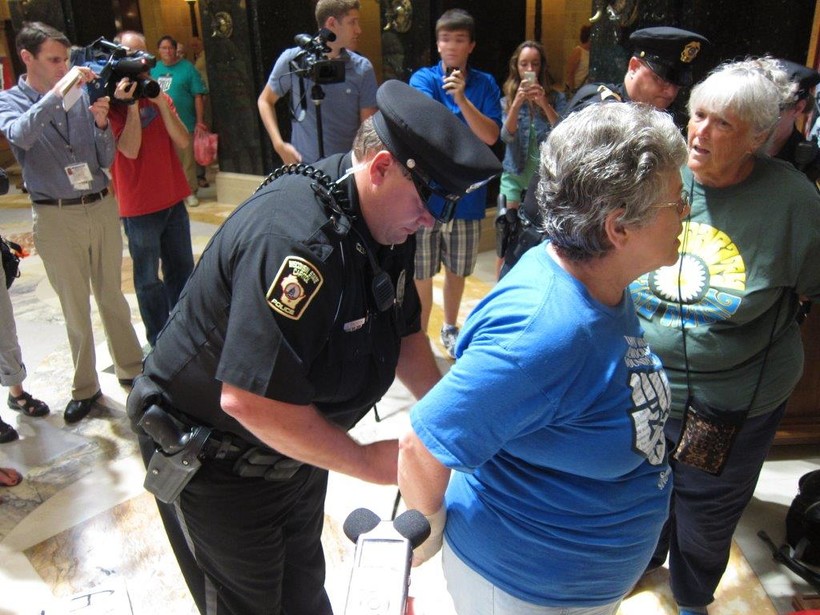 Capitol Police And 'The Exercise Of Discretion'

When police began mass arrests of protesters for gathering without a permit in the state Capitol last week, it marked a change in strategy for officers. In essence, they used handcuffs and $200 tickets to send a message that the Capitol's permit rules would be enforced when it came to the daily Solidarity Sing Along.

It was a judgment call - the kind police make every day. But this one has created a near daily spectacle at the Capitol.

An arrest can be a dramatic event. An attention getter. There's a reason police shows are popular on TV, and even they grapple with when to use their power. Consider this scene from HBO's "The Wire." (Headphones recommended: language not entirely safe for work.)

Major Howard "Bunny" Colvin: "Somewheres, back in the dawn of time, this district had itself a civic dilemma of epic proportion."

That's Major Howard "Bunny" Colvin, a fictional veteran of the Baltimore Police Department, telling his officers about the time the city council passed a law that forbade alcoholic consumption in public places. That meant in the streets and on the corner, which Colvin calls the "poor man's lounge." He says officers were in a bind.

Colvin: "If they arrested every dude out there for tipping back a High Life, there'd be no other time for any other kind of police work. And if they looked the other way, they'd open themselves to all kinds of flaunting, all kinds of disrespect."

It might sound like a stretch to compare what happened in the mean streets of "The Wire" to what's happening in the marble halls of the Wisconsin Capitol, but UW Clinical Professor Michael Scott doesn't think so. "It's not a stretch metaphor at all, it's a good one. This is, in the parlance of policing, what we call 'the exercise of discretion.'"

Scott is a former police officer, a fan of "The Wire," and the director of the Center for Problem-Oriented Policing. He says the exercise of discretion is the glue that keeps society together. "There's no community that I know of in the United States that genuinely wants full strict enforcement of every law on the books. The people simply would not tolerate it, in any place, under any conditions that I can think of."

Scott says police are constantly making judgment calls about what to enforce, and in the Capitol, he says they're breaking from past practices. For more than a week now, Capitol Police have prioritized a section of administrative code requiring a permit for organized events of a certain size. They use an oversized megaphone to make daily declarations that the rule is being violated by the Solidarity Sing Along: "Please move your group outside or disperse immediately. If you do not, each participant is subject to arrest."

The voice on that recorded message is Capitol Police Chief Dave Erwin. He declined requests to discuss the latest arrests.

Other police defer to Erwin here. Dane County Sheriff Dave Mahoney, who in the past criticized the Walker Administration's use of police to restrict access to the Capitol, says this situation is different. "If the Capitol has obtained a rule that you need to obtain a permit so that they can conduct daily business and ensure that everybody has the right to come forward and express their view, why not abide by the rule?"

The practical effect of the arrests is that - at least for the short term - they've attracted more protesters to the Capitol.

How did police on The Wire handle their problem? Major Colvin tells officers that a compromise was reached. People could drink on the streets if they kept their bottles in a paper bag.

Colvin: "And it gave us permission to go and do police work."

The Wire comparison gets thin here because in the more than one week since mass arrests began at the Capitol, there's been little talk of compromise. It's a real life police drama and there are no signs that it's about to be canceled.