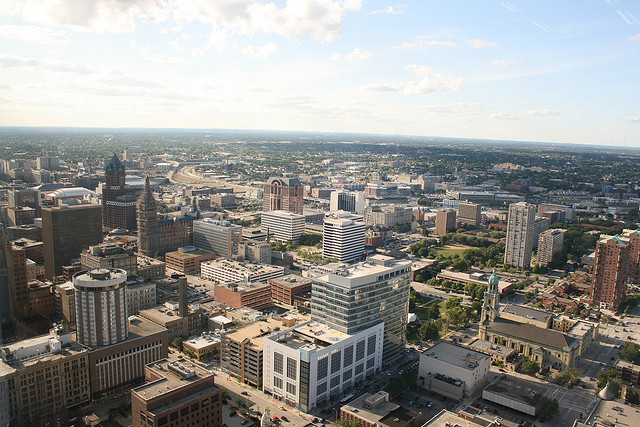 Moore Has Represented The District Since 2005
By Ximena Conde
Share:

The race for Wisconsin's 4th Congressional District — a heavily democratic district encompassing all of Milwaukee and many of its surrounding suburbs — has long-time incumbent U.S. Rep. Gwen Moore, D-Milwaukee, facing two little-known challengers.

If re-elected Moore, who has held the seat since 2005, says she plans to protect what remains of the Affordable Care Act, a law that her opponents see in less favorable terms.

That mandate was undone with last year’s GOP tax cuts and Senate Majority Leader Mitch McConnell has alluded to making another attempt to repeal and replace what’s left of the ACA, should the party retain congressional control in Tuesday's midterms.

Rogers said he would support an ACA replacement on one condition.

Independent candidate Robert Raymond, who works in construction and does occasional tax consulting for law firms, takes issue with the ACA, which he thinks merits restructuring — though he said he believes everyone should have health care.

"We had a system that most people were happy with, we might have been better off just taking care of people who don’t have health insurance than changing the whole system for people who already had it," he explained.

Raymond said the focus should be in monitoring pricing practices of pharmaceutical companies.

When it comes to the economy, Moore said one way to help working families is to raise the minimum wage, a move she's championed for years.

"People are working harder than they ever have been for less and less, proportionately speaking," she said. "For $7.25 an hour, you could have two of those part-time jobs and still be unable to pay for health care, unable to pay for rent."

Rogers said he would work as a broker to bring businesses to Wisconsin and thinks the state should be wooing more technology companies like Taiwanese manufacturer Foxconn. He said he would like to draw these companies into the district.

"I will push for making Milwaukee itself a high-tech city," Rogers said.

Raymond backs creating a structured tax system where companies pay lower taxes for manufacturing in the U.S. and offering benefits to its employees.

"The more people that private enterprise employ and provide decent living wages, the less people need the government to provide for them and those companies should pay the least amount of tax," he said.

Still, the candidates have other issues they hold close.

Rogers takes a special interest in providing more technical training to inmates so they can have work skills when they complete their sentence and save money for when they're released. The interest comes from Rogers' own time in prison. He has two previous cocaine-related convictions, one which resulted in a three-year sentence. Raymond has a prior warrant over delinquent taxes.

Raymond said he favors directing defense spending to other services in the U.S.

Moore wants to re-examine what she called the unintended consequences of the GOP tax bill by securing a spot on the Ways and Means Committee.

"I think being a goalie to prevent (Republicans) from paying for this tax bill with Social Security and Medicare would be one of my highest priorities," she said.

Raymond and Rogers are Milwaukee natives and have run for public office before. Raymond has run for both chambers of Congress. Moore was born in Racine.

Moore has won all her re-election bids in this district with at least 69 percent of the vote.