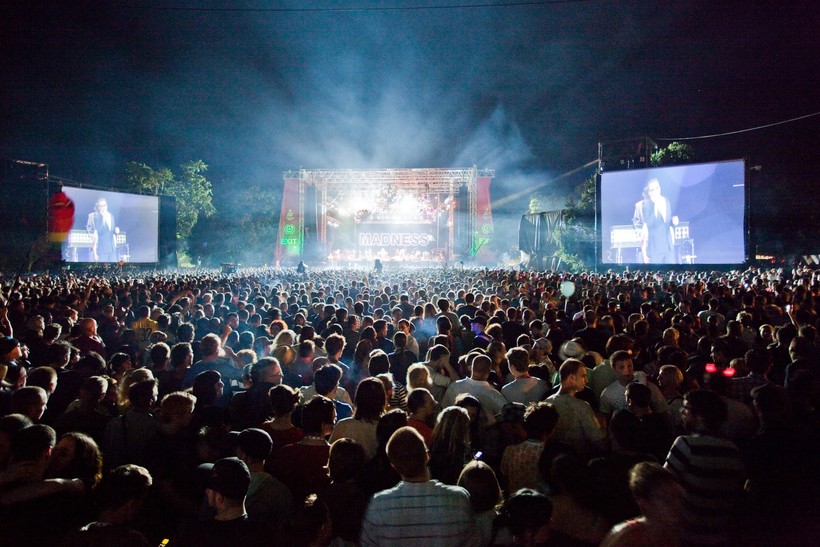 The band Madness performs at the 2009 Exit Music Festival.

Can Music Festivals Be Too Big?

This summer, Milwaukee hosted their 47th annual Summerfest, a 10-day event that bills itself as "The World’s Largest Music Festival." The numbers back up that claim: This year, more than 770,000 people came through the Summerfest gates.

Two weeks later, the city of Eau Claire hosted the first ever Eaux Claires Music Festival, a two-day camp-out in an isolated field outside of town. Organized by Justin Vernon — an Eau Clair native who fronts the Grammy-award-winning band Bon Iver — the event drew a crowd about 35 times smaller than Summerfest with about 22,000 people. The festival was promoted as a more intimate experience between performer and listener, one free of oppressive crowds and overt commercial sponsorship.

Eaux Claires is only one out of hundreds of small summer festivals that have gained traction throughout the nation in recent decades in response to the large, corporate festivals that have come to dominate the summer concert circuit — events like Coachella, Lollapalooza, and Bonnaroo.

Maura Johnston, a music critic and editor of Maura Magazine, said large festivals have become spaces where music is secondary to the "brand experience" that festival organizers create.

"That’s when you get this kind of nihilism creeping in, because what happens is the humanity gets erased and the personal connection between musician and audience gets erased," she said.

Johnson said she sees hope in the proliferation of small music festivals.

"I think you’ll still have the big three tentpole festivals — Coachella, Lollapalooza, Bonnaroo," she said. "But I do think that what you’re going to see is more smaller festivals that are headed up by bands."

Johnson cites recent events organized by Wilco and Drake, in addition to Eaux Claires, as evidence of a growing trend.

"Artists who have the capital to kind of plant a flag and be like, ‘Hey, come and hang out with us for a weekend,’" will do so, she said.

Johnston suggests that small festivals will continue to thrive as alternatives to large festivals as long as they maintain their values of independence and intimacy.

She said, "If you are smart about money and if you put together your lineup in a thoughtful way and also respect the artists and the audience, that’s the key."