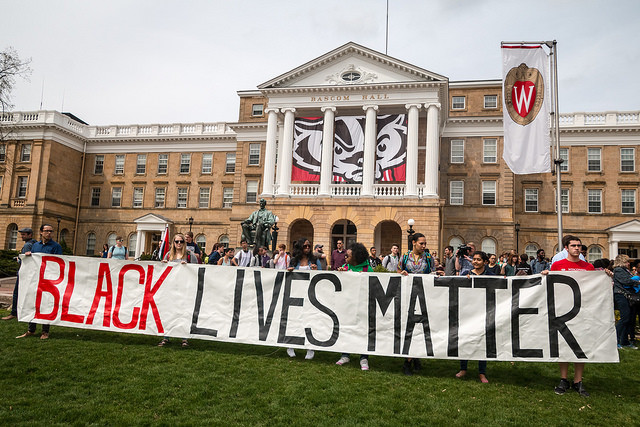 Campuses As Spaces For Conversations On Racism

Carmen Goséy’s words were harsh but definitive: "This institution does not care about people of color."

The statement closed her letter as outgoing student council chair at the University of Wisconsin-Madison and sparked debate as it made the rounds on social media earlier this month.

At UW-Madison, along with others across the country, student activists have rallied to start a conversation to change the culture on college campuses. They have argued that racism is an issue on campus, and one not discussed nearly enough.

"I think it’s exhausting to bring it out in the open," said DeShawn McKinney, a former UW-Madison student who graduated last weekend. "It’s not only the physical labor of making sure it gets out, but also the emotional and mental labor of having to relay up those experiences. At the same time, it helps to further solidify the community among the students who do go through those things."

"It could be comments like, 'I don’t see you as black,' or, 'I’m colorblind,'" Lassiter said. "Or, 'You’re not like the rest of them, DeShawn, you’re very articulate.'"

It’s local bars banning baggy pants and do-rags and avoiding hip-hop music so as not to "attract the wrong crowd."

Last year, a group of UW-Madison students started a campaign to draw attention to microaggressions they experience on campus every day, to "keep the momentum and unity of student voices speaking out against injustices."

The Real UW — A Visual Campaign features students holding white boards of real racially charged, ableist or sexist comments that have been said to them. Anti-racism and anti-discrimination campaigns such as this one have been started at college campuses all across the United States.

At American University in Washington, D.C., students protested after an individual hung bananas scrawled with hurtful messages from nooses all around campus.

In September, University of North Dakota students were outraged when a photo surfaced of several female students wearing the so-called blackface with the caption "Black lives matter," referencing the Black Lives Matter movement. In Mississippi, students held a sit-in after a student tweeted racially-charged comments in response to a shooting of an African-American man.

"College campuses are these weird bubble spaces, very contained, but they’re microcosms of what’s happening on the larger scale, so I think it manifests itself," he said. "The proportions of people of color that exist in these spaces are much lower than exist in society … the effects can be more damning, I would say."

Lassiter said campuses can provide a place to have that conversation about race.

"To dismantle this thing called American racism, you need all of humanity to do it," Lassiter said. "I’m always pushing a paradigm. I’m always trying to train the next cohort of students who are gonna speak truth to power on all sides of the color line."