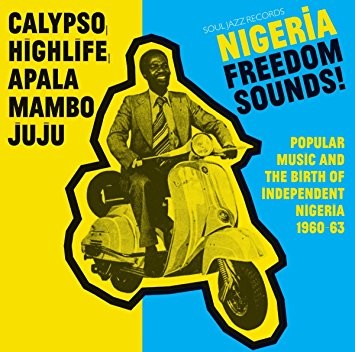 Soul Jazz Records' says this about their 2016 "Nigeria Freedom Sounds Release: (The album with great liner notes) "features a stunning selection of material spotlighting the vibrant musical scene in Nigeria at the start of the 1960s. With a wealth of musical and cultural history and newly independent from Britain, Nigerian music during this era was complex, diverse and forward-thinking, with musicians as excited in exploring their country's own musical lineage with styles such as Juju and Apala as they were in adapting and absorbing outside influences such as Ghanaian Highlife, Caribbean Calypsos and Mambo and more".

I discovered this recording while reviewing Scottish music recordings in Edinburgh in August of 2017.  It was what I often refer to as a 'chance purchase'.

Admittedly, I'm just beginning to explore the genres represented in the album.  And though I'm familiar with and I've aired just a few of the artists included, there is plenty to take in with sounds influenced by key elements from the political, cultural and musical landscape of the early 1960s in Nigeria.

"This album features many of the defining artists of this time who helped shape the Nigerian musical scene. Artists include I.K. Dairo and his Blue Spots, Haruna Ishola and his Group, E.C. Arinze, Sammy Akpabot and His All Stars, Godwin Omobuwa and his Soundmakers, Ganiyu Kale and His Guinea Mambo Orchestra, and many more".

So far and with a review of just a few tracks, it has proven to have been a good investment worthy of airplay on Hg.  In addition, the nearly fifty page booklet with original artistic reproductions of other album covers within the genre are included.  And for me, this feature is frankly worth as much as the recording itself which by the way includes twenty-three tracks.  If you purchase this one, I suggest reading the booklet before playing a single track.  The advance 'research' will provide a healthy dose of underpinning as you explore the album's many sounds from Calypso to Juju.