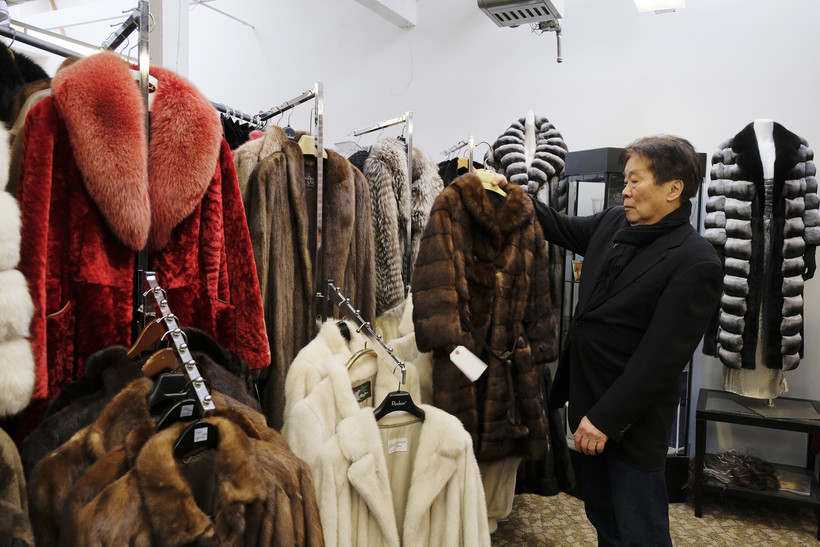 In this file photo taken Friday, March 16, 2018, Benjamin Lin holds up a fur coat at the B.B. Hawk showroom in San Francisco. At the time, San Francisco became the largest U.S. city to ban the sale of fur items in March 2018. Eric Risberg/AP Photo

Wisconsin mink farmers are keeping an eye on a California ban on fur products.

Minks are small, water-loving mammals related to ferrets and otters. Their fur is used to make luxury garments that can be worth tens of thousands of dollars, and Wisconsin is the country's top producer of mink pelts.

The greater issue, as Whelan sees it, is the momentum of the animal rights movement.

"Fur has always been kind of considered the low-hanging fruit of the animal activist world," Whelan said. "When they have a success against fur, that emboldens them to go after leather and wool and silk, and ultimately, all meat products."

California is the first state to ban the production and sale of furs and did so recently, although individual cities like Los Angeles have already approved bans of their own before. Animal rights groups like PETA have celebrated the ban, and similar bans have been proposed in Hawaii and New York City. A ban in New York City would be much worse than the ban in California, said Whelan, because it's the center of the fur trade and a cold-weather city.

The Fur Information Council of America (FICA), a fur industry group based in California, plans to challenge the ban in court.

"Two things are for certain: This law will do nothing for animal welfare and nothing to stop out-of-state sales of fur into California," wrote FICA spokesman Keith Kaplan in a statement.

For 200 years, Wisconsin's economy revolved around fur, according to the Wisconsin Historical Society. The desire for fur drove European expansion into Wisconsin, where traders relied on Native American trappers who supplied the world with beaver skins, a popular and naturally waterproof material for hats.

Colonialism, driven by the fur trade, decimated Native American tribes like the Ho-Chunk and changed indigenous cultures forever, when over hunting ended the fur trade in the area by 1850.

"I think it's devastating for our industry," said Brad Wiebensohn, a second-generation mink farmer, about the California fur ban.

Wiebensohn, co-owner of Sandy Bay Mink Ranch in Mishicot, said animal rights activists and "the vegans of the world" who oppose the use of fur don't understand his business. Minks have to be treated well, he said, because any health problems are reflected in the quality of their pelts.

"I think it all has to do with the new generation that thinks everything just grows on a tree or appears magically," said Wiebensohn.