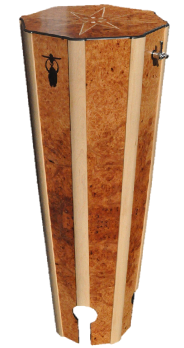 The Cajón is a percussion instrument originating from the African framed folkloric tradition of Peru, readily found throughout the country and most prominently in both Chincha and El Carmen where a significant population of Afro Peruvians reside.

The instrument is of magnificently simplistic construction. Essentially, it is wooden box with a circular hole in the middle of one of the vertical panels. It is negotiated as one would a congo drum by rhythmically slapping its thin front surface at various angles and heights while the player sits on its top. The front face is only partially fixed to the body of the box, giving a distinctive rattling sound when played. Often, loose piano strings or broken reeds are attached to the rear surface of the front face, which vibrates against them producing a sound very similar to a snare drum. The Peruvian Cajón can produce a great variety of sounds and timbres in different pitches that rival a drum set.

This unique percussive instrument was crafted by Africans enslaved in coastal Peru who also used the cajon as a chair, a table and as a sort of suitcase where they could transport and keep their modest belongings. Africans began to arrive in Peru in the 16th century. Along with the West African percussive instrument known as the Djembe (pronounced [JIM-BAY], the Peruvian Cajón has become a fixture in various world beat musical ensembles around the globe.