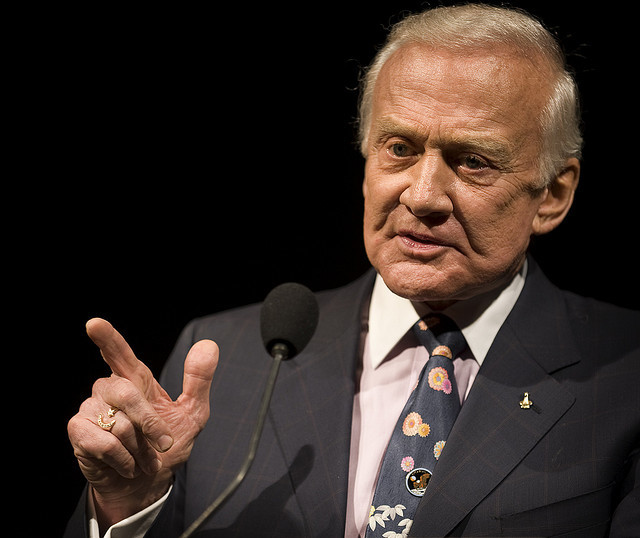 Buzz Aldrin says he believes the government could be spending more on space exploration.
​NASA (CC-BY-NC-ND)

According to Buzz Aldrin, the first human who steps on the surface of Mars won't see the same kind of "magnificent desolation" that Aldrin saw when he became one of the first people to walk on the moon.

Instead of a dusty landscape, he said, the Mars astronauts will be greeted at the bottom of their landing capsule ladder with an environment full of everything needed to support life.

"They will see many habitats that have been deployed years before they first set foot on the surface of Mars, along with a number of others, to begin to occupy permanently," said Aldrin in an interview with Wisconsin Public Radio.

In other words, the first people on Mars won’t be returning to Earth. Similar to the pilgrims on the Mayflower, said Aldrin, they will be prepared to call Mars home. Aldrin believes that organizations in the private sector, like SpaceX, could play a critical role in space colonization. NASA (CC-BY-NC-ND)

Aldrin is one of the biggest advocates of colonizing Mars, and has been working for years to help realize those first steps of landing humans on the red planet. As part of a colonization plan that he's developing with experts at the Florida Institute of Technology, Aldrin has advocated for putting humans on Mars' surface by the year 2040.

Some proponents of space colonization say finding an alternative to planet Earth could balance the risk of crises like climate change. However, when Aldrin argues for colonizing Mars, he doesn’t speak in those terms. In fact, he has been skeptical about the degree to which humans have caused climate change, or whether it’s actually permanent.

"If it's warming now, it may cool off later," Aldrin said in a 2009 interview. "I'm not in favor of just taking short-term isolated situations and depleting our resources to keep our climate just the way it is today."

Rather, Aldrin's argument for settling the red planet has more to with exploration for the sake of exploration — a trajectory that he said has always pushed humans farther afield.

"Countries, humans will move outward in space, will be in orbit, will be on the moon, and will be at Mars. And if the United States wants to sit back and watch that happen, that’s fine," he said. "It only took us 4 percent of discretionary funding in 1967, and we succeeded in putting two people for a day or two on the moon. And we did that six out of seven times by the end of 1972."

While the government, through NASA, was responsible for taking him into space in the 1960s, Aldrin is in favor of private-sector pioneering on the path to Mars. He compared the role of the private sector in space colonization to its role in the growth of aviation: Flight, he noted, evolved from a government operation during World War I into the private commercial enterprise it is today.

At the same time, though, he said he thinks the government could be doing more. Currently, about 0.5 percent of the federal budget goes toward funding NASA. Of that, about 22 percent goes toward space exploration.

While Aldrin acknowledged there are other important things the government needs to focus on, he still sees space exploration as a valuable investment.

"Now, certainly our young people, to be inspired, would like to be among the first people to journey to Mars and become the pilgrims permanently building up colonies on the surface of Mars," he said.

Until then, pioneering first steps like Aldrin's will remain a memory.

"I got down to the bottom of the ladder and stepped on the moon, and I was just amazed at, the boot prints were just so firm," Aldrin said, recalling his journey on Apollo 11. "And yet it was a dusty surface, and I used the words 'magnificent desolation' to refer to the magnificence of human beings on this planet Earth improving our transportation systems up to the point where we could land two people for a day or so on the surface of the moon."