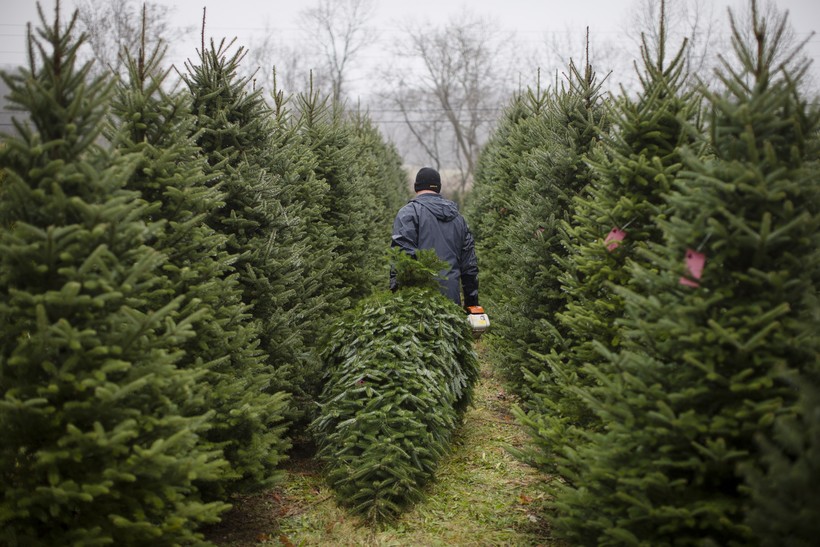 Balsam Firs Are Making A Comeback This Year
By Elizabeth Dohms
Share:

Hann's Christmas Farm in Oregon, Wisconsin sells locally grown, real Christmas trees. While that's not unusual for a Christmas tree farm in Wisconsin, it's a branding trick that Greg Hann, owner of tree farm, says has helped business tick up.

Sales of real Christmas trees declined nearly 1 million trees from 2002 to 2012, down to about 611,000. But in 2014, the number of Christmas trees cut gained some ground to 657,000. That number is projected to be higher in a new sales report due to be released next year.

Hann attributes the increase to members of the millennial generation looking for experiences and entertainment for themselves and their families.

"They're not a generation where they just sit on their hands," he said. "They want to come and bring their kids out. That want to do different experiences."

But he also mentioned that they like things "supersized" and have fed into an agri-entertainment industry leading farms such as Hann's to incorporate hot cider, gift shops, wagon rides and even petting zoos into the experience.

For those concerned about the environment and the impact cutting trees might have on it, Hann said Christmas trees are treated the same as pumpkins or watermelons.

With that comes natural benefits, Hann said, such as ground cover, habitat for deer, birds and turkeys, and flowering plants to attract butterflies, bees and insects.

According to the association, Christmas trees are grown in rows with six-foot spacing between each of the trees. The industry is sustainable because two or three trees are planted for each one cut, the association stated.

This year, the fraser fir is popular, despite being considered exotic for Wisconsin, but Hann said the balsam fir is making a comeback. Although pines, such as the Scotch and white pines that were popular in the 1970s, have better needle retention, the balsam fir has a distinctive fragrance, making them desirable.

"The one thing the artificial or fake tree industry doesn't have is the real smell," Hann said. "If they could figure out how to bottle the smell of a real tree, I think we'd be in trouble."

For those cutting down trees, Hann recommends making a fresh cut to the trunk of an inch or 2 inches right before placing it in a tree stand.

"That sap will actually kind of cauterize the end of the trunk," he said, also recommending the tree is cut with a rough saw, such as a chainsaw or old bow saw.

The National Christmas Tree Association advises not to cut into the sides of the trunk to make it fit into a tree stand because the outer layers pull in the most water.

For a longer-lasting tree, keep a lot of water in the stand. Trees can drink up to a gallon and a half of water a day.

And as for other tricks for making trees last longer? Hann said avoid them. "Save your aspirin for your headache after Christmas Eve and save your soda for mixing cocktails. Nothing does as well as real water."