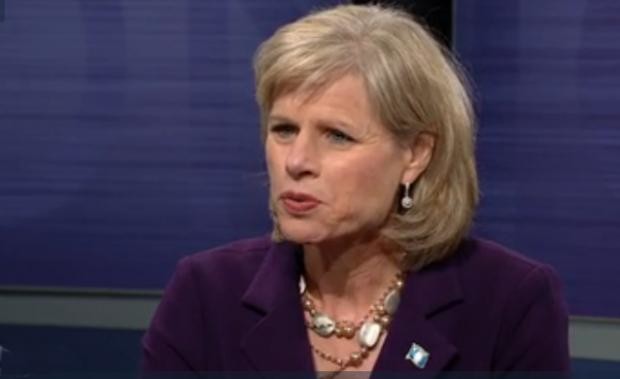 Above, gubernatorial candidate Mary Burke during an appearance on Wisconsin Public Television's "Here and Now." Image courtesy of WPT.

Burke Says If Elected, She'll Try To Stop GTAC Mine

While Gov.  Scott Walker is full speed ahead on the proposed iron ore mine in the Penokee Range of northern Wisconsin, his Democratic challenger Mary Burke wants to put on the brakes.

Officials with Gogebic Taconite (GTAC) said the $1.5-billion project will create 600 jobs at what would be the largest open pit iron ore mine in North America. Although opponents dispute the numbers, Walker said that GTAC’s investment will become an economic engine in an area that has some of the highest unemployment numbers in Wisconsin.

Burke, however, said she is aware of Iron County’s double-digits jobless rates and Ashland County's figures at 8.5 percent in May.  But, she said this mine, with newly-passed legislation backed by Walker, would threaten public health and destroy the environment. So, she will try to stop the GTAC mine.

“I will certainly look at every tool that I have and to make sure that we are protecting our natural resources.  Our air, our water are so important not only to the people who live in the community, but to the tourism industry as well," said Burke.

The Democrat's position has evolved since last year when she endorsed environmentally responsible mining.

Burke also said she thinks GTAC should pay impact fees to surrounding towns that incur costs because of the 4½-mile-long mine.

“They need to be fairer, particularly in the communities that they’re operating in and that those communities should see the benefits,” she said.

Bruke said an economic development fund should be started to create other jobs.

“We have to look at the assets and the opportunities across the northern part of the state and understand how we can have a more vibrant economy because I take very seriously the loss of jobs there,” she said.

Burke said she might tour the mine area and meet with tribal officials when she visits there during the Fourth of July weekend.