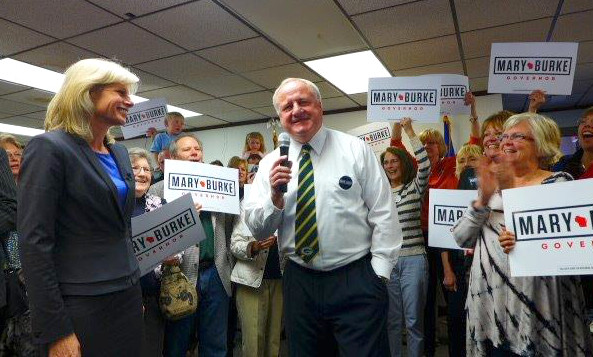 Campaign Tries To Fire Up Voters In Region That Traditionally Swings Red
By Patty Murray
Share:

Democrat Mary Burke was in pep rally mode on Tuesday at a campaign stop in Green Bay, where she emphasized that voter turnout would be the key to her success.

Northeastern Wisconsin has traditionally supported Republican candidates, but it does vote for Democrats on occasion. Sen. Dave Hansen, who introduced Mary Burke to Democratic Party volunteers at the rally, is proof of that: The assistant minority leader was first elected in the 30th Senate District in 2000.

“This is the most important election in your lifetime!” he shouted to supporters. “And it will be decided in northeastern Wisconsin with turnout. You have got to do everything you can. It became a little bit more difficult with the voter suppression, but we've got to get the vote out. We must win in November!”

The “voter suppression” Hansen mentioned was a reference to the recent reinstatement of voter ID requirements that will most likely be in effect for the November election.

For her part, Burke talked about a recent Marquette University Law School poll that found the both she and Republican incumbent Scott Walker were tied at 46 percent.

She also laced her speech with several football references. “We have given Governor Walker four seasons and it's time for a new coach and a new game plan,” she said.

With just more than a month before Election Day, Burke called it “the fourth quarter.”

Burke's campaign has also announced that first lady Michelle Obama will be making a second campaign stop on behalf of the candidate. The two will appear in Madison Tuesday, Oct. 7.