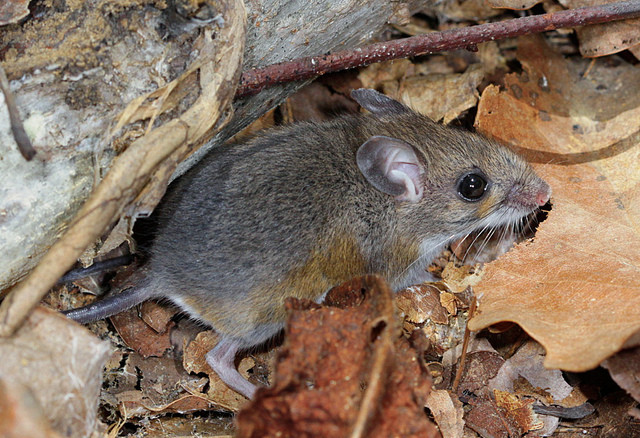 Small mammals like this white-footed mouse and many other birds and animals will be attracted by a brush pile. Photo: cotinis (CC-BY-NC-SA).

When the cold weather hits, it’s common to see people scurry from house to car or from bus stop to work in order to minimize exposure to the elements. While wildlife is better equipped in many ways to withstand a Wisconsin winter, they also need shelter — and there are ways that people can provide that.

Scott Craven, an emeritus wildlife specialist with the University of Wisconsin-Extension, said that a well-constructed brush pile will serve the wildlife that is already in the area, while also attracting more to the area.

In fact, he said, there is no limit to the types of wildlife that will appreciate well-constructed shelter.

“I would say it’s a shorter list to describe the sort of animals that would not use the brush pile than those that would,” Craven said.

Small mammals like rabbits, squirrels, shrews, mice and voles that remain active through the winter would be happy to find that type of shelter, he said. Small birds that winter in Wisconsin, like chickadees and juncos, will also be drawn to a brush pile, especially because they are usually found close to the ground: “They would certainly go in there both for shelter and to look for insects,” said Craven.

Small predators like raccoons, opossums, skunks, weasels and fox will visit a brush pile, Craven said, even if they aren't using it for shelter.

“Everything eats something,” he said. “And what you’ve essentially created is a food resource for them.”

In the warmer months, Craven said that in addition to chipmunks, ground squirrels and other mammals, salamanders, skinks and snakes would take advantage of the shelter as well.

How To Make A Brush Pile

Making a brush pile is a fairly straightforward two-step process: Construct a base, and then prop up brush on top of it.

For the base, Craven recommended using the largest stalk or trunk that is available. Logs, heavy brush or even pallets or construction debris work well.

While space may dictate the size of the base, Craven said that laying several long logs parallel to each other on the ground with about 6-8 inches between them would be ideal. Then, a second similar layer can be added, perpendicular to the first. One or two additional layers in the same pattern can be added if supplies are available, he said.

This creates a raised grid of sorts: “You’re creating a network close to the ground of spaces and cavities,” Craven said.

The next step is to take loose brush or small trees or shrubs and pile them “tepee-fashion” on the base. Those tented materials “shed the weather and water a little better,” Craven said. But more importantly, they provide “a nice, tight roof over all of those cavities and living spaces that you’ve provided by weaving in the network underneath.”

Not everyone has acres to work with, and some people may not have a lot of room for a huge brush pile in their yard. Craven said that “anything’s better than nothing,” and that brush piles up to 25 feet in diameter “are just fine.”

If possible, Craven added, place the brush pile near to a fence or a known path that wildlife uses. That way, he said, the wildlife using the shelter “doesn’t have to expose themselves by zooming across yards of open, bare fields, where they would be risking all sorts of predators and other hazards.”

For those that do have large properties, Craven said that a series of brush piles 50 to 100 yards apart that lead to a brushy or wooded area would be ideal. “That would be a pretty nice set-up,” he said. “A wildlife paradise!”

Craven said that if a brush pile is made correctly, it can last several seasons.

Craven noted that an idea that circulates after the holidays is to recycle Christmas trees for wildlife shelter. He said that while in theory that could work, the reality is that most trees are very dry and brittle by the time they are discarded.

Craven said that evergreens grown on Christmas tree farms are often bred to be very dense and thick. While that’s desirable as a holiday decoration, it means that there are fewer nooks and crannies within the tree structure that wildlife would use. For the wildlife, he said those trees “would not be particularly comfortable.”

That doesn’t mean that they are completely without use, though. Craven said that his large discarded Christmas tree is leaning against his deck, not far from the bird feeders. That tree will provide a perch for birds until the spring where there usually is not one.

The Humane Society of the United States has an article about building brush piles that includes general tips for a healthy and humane yard for wildlife. The Wisconsin Department of Natural Resources also provides information about brush pile construction.