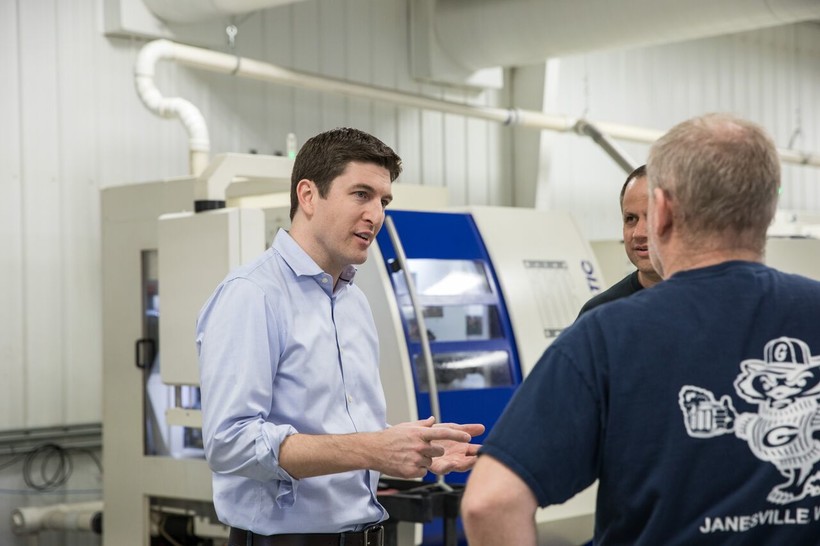 The winner of the southeastern Wisconsin district, which covers Janesville, Kenosha and Racine, will face a Democratic challenger – Randy Bryce or Cathy Myers – in the November general election.

Bryan Steil, who has been endorsed by Ryan, is an attorney for manufacturing companies and serves on the University of Wisconsin System Board of Regents.

Steil recently spoke with WPR’s "Central Time" host Rob Ferrett. His interview has been edited for brevity and clarity.

Rob Ferret: How has your background both in business and with the UW Regents set you up to represent the people of the 1st District?

Bryan Steil: So in manufacturing, every day you're solving problems ... you've got to do those things on time. You’ve got to do it under budget every time or you're fired. If we had that type of private sector disciplined process approach in Washington, I think we'd be in a much better place.

RF: If you're elected, you would be replacing House Speaker Paul Ryan. How do you evaluate his time in office?

BS: I look at his 20 years and think about all the big, bold conservative reforms he's pushed. And then some of those that have turned into really positive policies. Look at the tax reform that was passed recently. I think we're beginning to see the positive economic benefits of moving that type of tax legislation through. I think those ideas have a direct correlation to the economic growth that we're seeing.

RF: Are there needs in the 1st District in particular that you think need more advocacy in Washington?

In Wisconsin, we budget every two years. Sometimes that’s late, there's fights about what the priorities are ... but ultimately that gets resolved and then you have 23 months before you come back to the next spending cycle. In Washington, they budget every year. They're often six months late and then they fight for the next six months. A Wisconsin style approach ... would give time for a much more thoughtful deliberative process ... and ultimately would spend that money much more wisely.

RF: What would be some of your priorities when it comes to immigration.

BS: Republicans and Democrats alike have let us down. And so step one: we need to secure the border. Step two: we need comprehensive immigration reform that addresses the complete disaster that we have on our hands ... and a key step of that is to create a legal immigration system that addresses our workforce needs.

RF: One area where some elected Wisconsin Republicans are disagreeing with the Republican president is tariffs. What's your view on the latest tariffs?

RF: Another big issue in elections this year is health care.

BS: What we need to do is stay focused on reducing the cost of health care and improving the quality; and in my opinion, you don't do that through a government takeover of health care. You do that through putting the power in the individual and the patient and the doctor to make choices. That's a key step in driving costs down and quality up.

Now I want to be clear that's not in every instance that there's going to be a cost benefit analysis, you’re in a car accident, you ... have some sort of serious issue, that's a different ballgame. But where we have opportunities to allow patients and doctors to make the decisions that are in their best interest, the more we're going to be able to drive cost down and quality up.