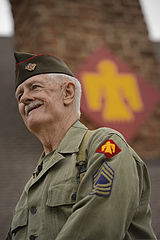 image by US Department of Defense

Expert Says He Feels That It’s A Step In Right Direction
By Judith Siers-Poisson
Share:

The U.S. Senate approved the Ryan-Murray budget agreement on Wednesday, sending the measure to the Oval Office for President Barack Obama's signature.

One provision of the federal budget deal that is raising questions is a reduction in the annual cost of living adjustment for military retirees by 1 percent.  That may seem significant, but former Asssistant Secretary of Defense Lawrence Korb said that it isn't a major hit to retired members of the military.

Korb, a senior fellow at the Center for American Progress, a senior advisor to the Center for Defense Information and an adjunct professor at Georgetown University, had previously served in the Defense Department overseeing areas such as manpower, reserve affairs, installations and logistics from 1981 through 1985. In that position, Korb administered about 70 percent of the defense budget.

Currently, for retired military, pay is determined by the average of the final three years of service.  The length of someone's service determines what percentage of pay is received -- ranging from 50 percent to 100 percent.

Korb explained that if a member of the military retires before age 62, “rather than giving you the whole COLA, or what we call Cost of Living Allowance increase each year, you’re going to get 1 percent less than that.”

But, Korb said that once the retiree reaches 62, “it’s recomputed and so you go back to where you would have been.”

He added that those who retire from the military in the decades or years leading up to age 62 are really still of working age.

“Most people who retire in their 40s, they’re not going to do nothing. They’re probably going to get another job,” he said.

So, it would be rare that their sole or primary source of income is that military retirement benefit.

While it might seem risky or even disrespectful to reduce the compensation of men and women who have served in the nation’s military, Korb put it in perspective. He reported that U.S. Rep. Paul Ryan, who co-authored the budget agreement, said that military compensation has to be dealt with.

“Even the military leaders say that if we don’t do anything, we’re going to be like General Motors. We’re going to be paying people who work now -- and used to work here -- for health care, and we’re not going to be able to buy any weapons systems or anything because the military compensation is rising so much more rapidly than the Old-World budget,” Korb said.