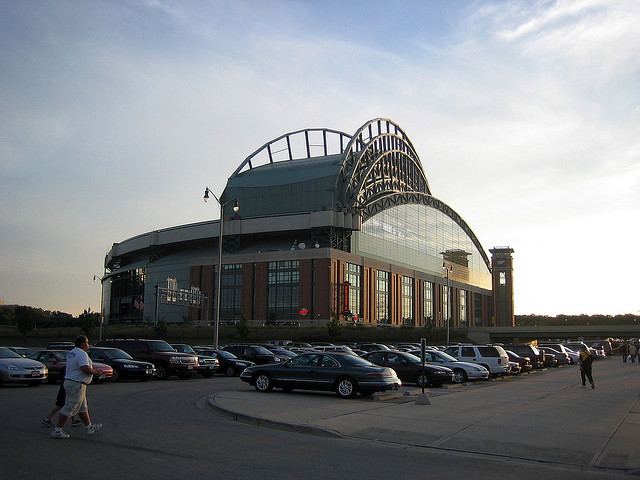 Miller Park is regarded as one of the largest construction projects in Wisconsin history.

Twenty years ago, a Wisconsin governor asked the state Legislature to help finance a professional sports venue: a new baseball stadium for the Milwaukee Brewers.

Today, with Gov. Scott Walker's plan to help finance a new arena for the Milwaukee Bucks under scrutiny in the Legislature, it feels like history is repeating itself. But while there are similarities between Gov. Tommy Thompson's Brewers deal from 1995 — which eventually resulted in the construction of Miller Park — and Walker's Bucks proposal this year, there are also some key differences.

In 1995, Gov. Tommy Thompson had presidential aspirations. Likewise, in 2015, Gov. Scott Walker is traveling the country in the early stages of a presidential campaign — although he has some unfinished business at home, including the Bucks arena plan.

Walker's sales pitch for the new arena has been to focus less on what the government would spend on the project, and focus more on what the state stands to lose if the Bucks leave town. "It's important to remember that what we're talking about is, it's cheaper to keep them," he said when unveiling the financing package earlier this month.

"People keep talking about the additional costs, but I want to submit I think the one thing that's disappointing — nobody talks about what would happen, the huge shortfall, if we were gone," he said.

Those similarities aside, it's much easier to find differences between the Brewers and Bucks debates.

Walker introduced his Bucks plan as part of the budget, which basically meant he thought he could pass it with only Republican votes. As they do today, Republicans ran state government in 1995, but the Brewers deal was a standalone bill. GOP leaders like then-Assembly Speaker David Prosser were always seeking support from both parties.

"This has to be bipartisan, and the bill will not pass without a number of votes from Milwaukee County," said Prosser.

Pushing the Brewers deal as a standalone bill meant it also got its own public hearing. Some of the feedback was favorable: "I hope and pray that my son gets the same opportunity I get, and that's the ability to see major league baseball in his city," said one man who testified at the hearing.

Selig — the Brewers' owner — was front and center throughout the entire process.

"I have all of my blood and sweat and tears into this franchise," he said.

Selig is a Milwaukee native who was credited with bringing baseball back to the city after the Braves left town. The Bucks new owners are are New York hedge fund managers. They've been more low-key throughout the process of the arena financing deal.

The Brewers also brought in all-star team of lobbyists to talk to lawmakers, including Hall of Famer Hank Aaron.

"When the Brewers go anywhere — no matter where it is — when they say … 'Milwaukee Brewers,' … that means that team is yours. It belongs to you," said Aaron.

All of the people lobbying for the Brewers deal had a message that was different than what's being pushed for today. Walker describes the Bucks deal as strictly a financial decision.

"Even if people say, 'You know what? I live clear on the other side of the state, and I could care less about the Milwaukee Bucks. I'm never going to see them, I don't like NBA basketball.' If that's someone's opinion, they should still care about this," said Walker.

That's not to say finances were unimportant in the Brewers deal. It was tremendously controversial, and it cost at least one Republican senator his job.

Twenty years later, people still talk about the deal, which makes this Bucks deal more complicated. It's one piece of history that majority Republicans don't want to repeat.