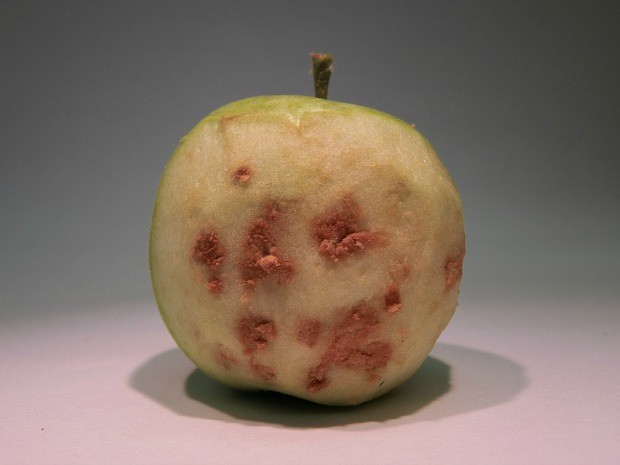 Brown marmorated stink bugs feed on apples and many other crops.

The brown marmorated stink bug is an invasive species in the United States that is expanding its range as an agricultural pest around the nation. The bug likely made its way from native East Asian habitats to the U.S. as stowaways in shipping containers. The first confirmed specimen showed up in Pennsylvania in 2001.

Although it was first collected in that state in 1998, there were unconfirmed sightings of the insect in that state as early as 1996. The bugs probably would not migrate so aggressively across the continent without unwitting human assistance, said Christelle Guédot, an entomologist with University of Wisconsin-Extension and UW-Madison.

Brown marmorated stink bugs expand their range by flying from crop to crop, as well as by hitchhiking on vehicles and in materials that people are moving. "It's an incredible hitchhiker," Tracy Leskey, an entomologist with the U.S. Department of Agriculture's Appalachian Fruit Research Station in Kearneysville, W.Va, said in a 2010 New York Times article. "The adults are moving and looking for places to spend the winter."

Pennsylvania is the epicenter of the bug's impact. Peach and apple growers in that state saw large losses in 2010 from bug, while corn and soybean yields suffered as well.

Of course, not every state's experience with the brown marmorated stink bug has been the same. It can survive pretty much anywhere in the continental U.S., but climate and weather affect its ability to breed. The species appears to produce one generation per year in Pennsylvania, with mating and egg-laying occurring from May through August or September. In more southerly states, two generations are more common, and a third generation may be possible with early spring and longer summer weather.

For Wisconsin's neighbors, the bug is considered an agricultural problem in Michigan and a nuisance in Illinois. It has been observed in Iowa and Minnesota.

So far, the brown marmorated stink bug has followed a reliable pattern whenever it moves into new territory, said Guédot. Adult hitchhikers show up in hotels and other places out-of-state travelers visit. As the bugs become more established they begin to breed. Then, they start showing up in people's homes, mostly in urban and suburban areas. As the population grows, some of the bugs fly away from urban areas and begin over-wintering in the woods. When they emerge in spring, they spread into more rural areas and establish themselves as agricultural pests.

Guédot said this cycle typically takes three to five years. With Wisconsin's first bug being spotted in 2010, the state could very likely have a new agricultural pest on its hands in the 2016 growing season.

Brown marmorated stink bugs are usually found in highly localized populations near the edge of fields and woods. They feed on agricultural, garden and ornamental plants but are especially attracted to apple and other fruit trees. However, the bug forages on a wide variety of fruit, vegetable and field crops, including asparagus, beans, cherry, corn, cranberry, grape, mulberry, peach, pear, pepper, raspberry, tomato and soybean. It can also threaten ornamental plants, including basswood, butterflybush, catalpa, honeysuckle, mimosa, pyracantha, redbud, rose, serviceberry, and sweetgum.

One apple growers' trade group estimated the bug caused $37 million in damage to the 2010 apple crop in Pennsylvania, Maryland, Virginia and West Virginia.

"Orchard crops like apples, pears and peaches are high-risk crops, and if management practices are not in place, the damage can be severe," said Brett Blaauw, a research associate at Rutgers University, said in an interview with Growing Produce magazine.

While entomologists can anticipate the bug's leap from cities to woods to farms, they can't interrupt it. "Eradicating a population when they're building up in numbers so quickly, and hiding so well, doesn't seem really feasible," Guédot said.

Plus, like many invasive species, the brown marmorated stink bug may not have any natural predators in its new habitats. "Like other exotics, it lacks natural enemies," said Brian Kuhn, director of the Bureau of Plant Industry in the Wisconsin Department of Agriculture, Trade and Consumer Protection.

Even with pesticides and crop management, the bug has proven a tenacious pest and a prodigious breeder in some states.

"Once this thing gets rocking and rolling, it's just like (the) Asian lady beetle. It comes in by the bucketsful," said Phil Pellitteri, former head of the UW Insect Diagnostic Lab, in an interview on Wisconsin Public Radio's "The Larry Meiller Show" in September 2015.

Pellitteri did note that the bug's numbers on the East Coast have declined in recent years. But it has already caused significant damage to crops in that region.