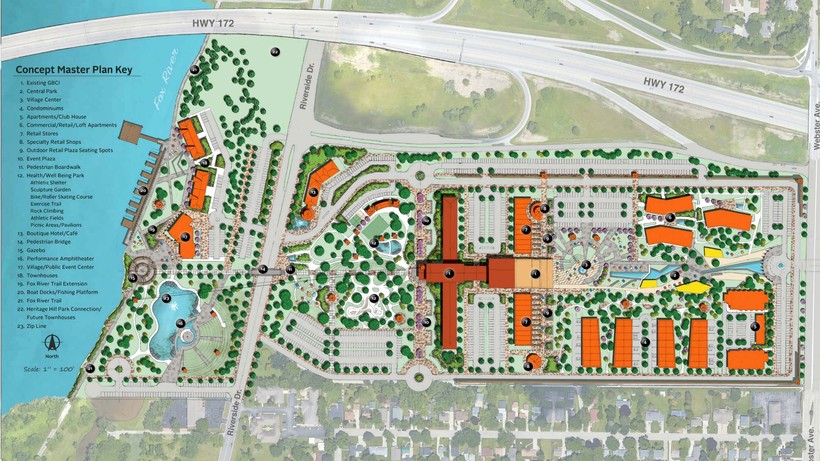 In the not-so-distant future couples could have the option to get married in what is now a maximum-security prison. A wedding venue is just one of the proposals the Village of Allouez has for the roughly 60-acre Green Bay Correctional Institution site near the banks of the Fox River that now houses nearly 1,100 inmates.

An economic analysis shows Brown County stands to benefit financially by getting rid of the prison and redeveloping the site.

The correctional facility is considered to be outdated and unsafe for both inmates and staff. It was built in 1898 and requires millions of dollars in taxpayer-funded maintenance.

The analysis was done by St. Norbert College's economics professor Marc Schaffer. He based his findings on a development proposal by the Village of Allouez.

Shaffer said it presents "tremendous upside potential" for the Village of Allouez and Brown County as a whole.

"The site plan that we analyzed suggested an annual economic impact of 1,463 jobs, around $58 million in income to Brown County and about $138-and-a-half million in economic activity, again, on an annual basis," he added.

Shaffer said Brown County, Allouez, and public schools could share between $1.1 million and $1.4 million a year in tax revenue if the prison was moved elsewhere and the proposed development came to fruition. He also estimated the development would generate "more than $49.8 million in total economic output," as well as increase sales taxes by nearly $3 million.

Republican Green Bay state Rep. David Steffen's district includes the prison site. He said he wants a new prison built within a 15- to 20-minute drive of the current location to prevent guards and other staff from quitting.

"We’re going to build it in a cornfield," Steffen said, adding that the state is paying $1 million a month by keeping the Green Bay Correctional Institution open. He also said the current facility does not offer counseling services that are available in other prisons.

Any relocation of the prison would have to be approved by the governor. It is unclear if a new facility would be state-run or operated by a private contractor.

Green Bay Correctional Institution isn’t the only prison in the state being evaluated. The Legislature’s Audit Committee is reviewing all of Wisconsin’s 36 prisons and correctional centers.

State Sen. Robert Cowles, R-Green Bay, is co-chair of the committee. He said the goal is to find out how the state is "bleeding money."

Cowles expects the audit — and answers to some of those questions — to be finished sometime next year.