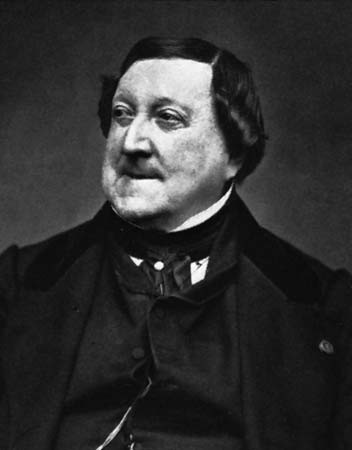 On February 20, 1816, a combination of miscalculations and mishaps had brought about a disastrous debut for Rossini’s operaThe Barber of Seville.  At the end of the contentious first act, Rossini sat at the piano and applauded the singers, but some in the audience thought he was praising his own opera, which made them all the more volatile.

Then there was the matter of the next night’s performance.

On the day after the debut, Rossini and alto Geltrude Righetti-Giorgi sat down and went over the score, and he took out some of the things that he thought the audience had good reason to dislike.

Rossini is said to have stated that for the second performance he decided to stay in his apartment, although he admitted that he couldn’t help taking out his watch at curtain time and singing the overture and the first act. When he couldn’t stand the suspense any longer, he pulled on his clothes and was on his way out the door when he heard a racket in the street.

According to another account, when Rossini saw that the crowd was carrying torches, he was afraid that they were coming to burn down his apartment house. He slipped outside and hid in a stable, where tenor Manuel Garcia found him and assured him that the opera had been a great success and that the crowd was eager to congratulate him.

The nervous Rossini expressed his scorn for the crowd in such blunt language that Garcia couldn’t convey the message in tactful terms and became the target of a fast-flying orange that gave him a black eye. Rossini’s landlord showed up, imploring him to speak to the crowd because they were threatening to burn the house down.

After breaking two windows, the crowd finally dispersed and the frazzled composer climbed back into bed, hoping for the time being to forget the frightening second night success of The Barber of Seville.