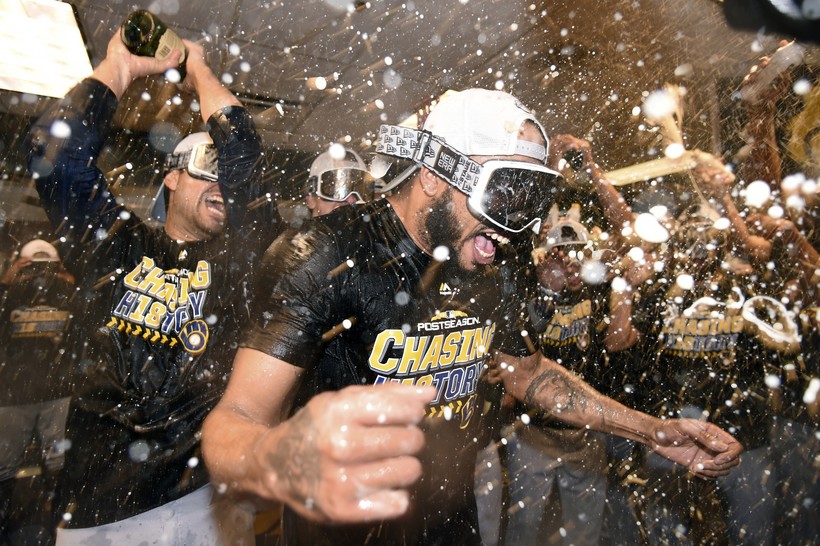 Milwaukee Brewers relief pitcher Jeremy Jeffress is doused by teammates as they celebrate in the clubhouse after Game 3 of a baseball National League Division Series against the Colorado Rockies, Sunday, Oct. 7, 2018, in Denver. The Brewers swept the series in three games and move on to the National League Championship Series. John Leyba/AP Photo

Brewers Will Play Winner Of The Dodgers-Braves Series, Starting Friday At Miller Park
By Pat Graham | The Associated Press
Share:

Wade Miley pitched masterfully into the fifth inning before turning it over to a lights-out Milwaukee bullpen, 38-year-old catcher Erik Kratz kept up his torrid hitting and the Brewers beat the Colorado Rockies 6-0 in Game 3 on a cool, misty Sunday to sweep their NL Division Series.

The Brewers have won 11 straight dating to the regular season and advance to their first NL Championship Series since 2011. They will play the winner of the Dodgers-Braves series, starting Friday at Miller Park.

With manager Craig Counsell making all the right moves, Milwaukee's pitching staff held Nolan Arenado, Trevor Story and the bruising Rockies to a combined two runs and 14 hits in the series. Of the 28 innings in the matchup, wild card Colorado scored in only one of them.

Making his postseason debut, Miley toughed the elements — he wore short sleeves when the temperature was 46 degrees — and was even tougher on Rockies hitters. The wily left-hander allowed three hits over 4 2/3 innings.

A procession of five Brewers relievers allowed one hit the rest of the way. With two on, Josh Hader got Ian Desmond to fly out to end the ninth and start an on-field celebration.

The first one to greet Hader was Kratz, who made his second postseason start and finished 3 for 4 with a double. Acquired from the New York Yankees in May for a player to be named, Kratz is making quite a name for himself in the playoffs. He had two RBIs on Friday.

Orlando Arcia and Keon Broxton hit back-to-back homers in the ninth off Wade Davis to make it 6-0 and end any sort of drama. Jesus Aguilar had a solo shot in the fourth off German Marquez that Counsell sort of predicted.

The Brewers manager said Saturday, "Aggie is going to hit a home run in the playoffs, a big homer with men on base, I promise."

Granted, it wasn't with men on base. But it was still big and gave the NL Central champs a 2-0 lead.

That was more than enough against a Colorado offense that was shut out twice in the series and hit .146 against Milwaukee's stingy pitching. Colorado's three All-Stars — Story, Arenado and Charlie Blackmon — finished the series with a combined five hits.

This is how well it went for the Brewers on the drizzly day: They scored twice in the sixth without a hit — one on a balk and another on a wild pitch, with Kratz lumbering home for the second run.

The 31-year-old Miley endured a bumpy season that saw him suffer a strained groin in March and later miss two months with a right oblique strain. He bottled up the Rockies with a cutter, curve and an effective change.

Marquez went five innings and allowed two runs before being lifted for a pinch-hitter. He got the start over Denver native Kyle Freeland, whose 2.40 at Coors Field this season was the lowest mark for a starter in franchise history.