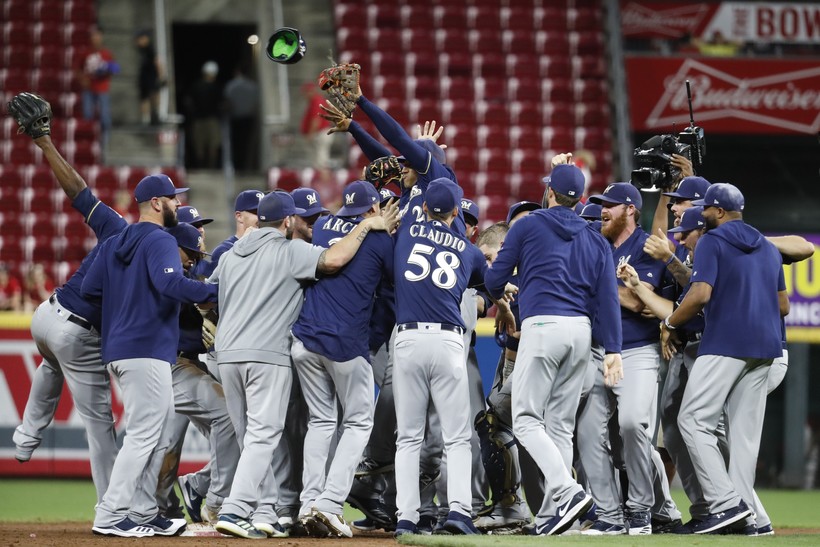 The Milwaukee Brewers celebrate a 9-2 win over the Cincinnati Reds in a baseball game Wednesday, Sept. 25, 2019, in Cincinnati. John Minchillo/AP Photo

This Will Be Second Straight Postseason Appearance For The Milwaukee Powerhouse
By The Associated Press
Share:

The Brewers have won six in a row and 17 of 19 despite losing MVP Christian Yelich to a broken kneecap, vaulting from also-ran to at least a wild card. There's more at their fingertips — the division-leading Cardinals lost again Wednesday, slicing their lead over the Brewers to 11/2 games.

The Brewers jogged onto the field and formed a scrum by second base after when Junior Guerra got Christian Colon on a grounder for the final out.

A sizzlin' September topped off by a bubbly celebration. Nobody does it better than these Brewers.

Last season, they raced from a five-game deficit to the NL Central title by going 19-6 after Sept. 1. They caught the Cubs and won a tiebreaker at Wrigley Field, then swept the Rockies and reached the NL Championship Series before losing in seven games to the Dodgers.

They've pulled off another improbable run with manager Craig Counsell's outside-the-box resourcefulness, the bullpen's imperviousness and the offense's ability to find a new star each game with everything on the line.

Braun — the 2007 NL Rookie of the Year and 2011 NL Most Valuable Player — has found his touch during this current winning streak.

Braun had a solo shot in a 4-2 win in the series opener, and got the celebration started early Wednesday with his eighth career grand slam in the first inning. Teammates were on their feet, leaning against the dugout railing in anticipation of a big night, when he connected off Tyler Mahle (2-12).

When Eric Thames followed with another homer, Brewers players jubilantly smacked the green padding atop the dugout railing — the party was on. Keston Hiura also connected off Mahle, whose last win was May 31.

Starter Jordan Lyles (12-8) contributed an infield single and scored a run during the Brewers' surge to an 8-1 lead after three innings.

Lyles gave up Eugenio Suarez's 49th homer, which moved him ahead of Mike Schmidt and Adrian Beltre for the modern NL record by a third baseman. George Foster holds the club record of 52 homers in 1977.

This was the sixth overall playoff spot for the Brewers, who started out as the Seattle Pilots in 1969 and moved to Milwaukee the next year. The only other back-to-back playoff appearances came for the Brewers in 1981-82. The franchise has never won the World Series.