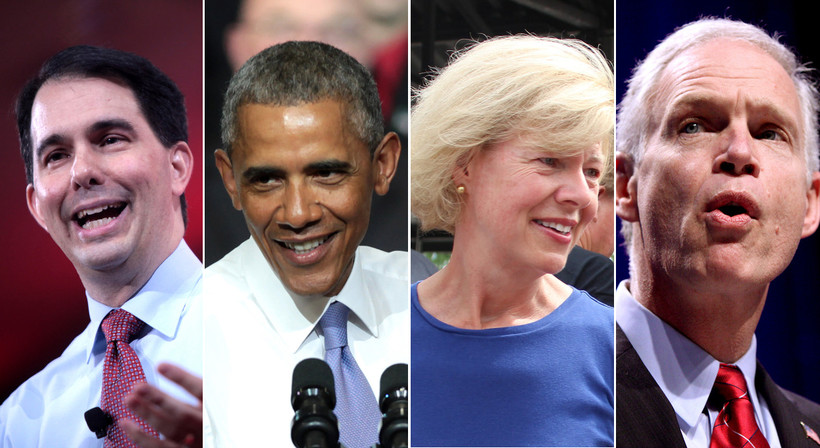 A Breakdown Of Approval Ratings From Latest Wisconsin Survey

​The Wisconsin voting public has weighed in on how President Barack Obama, Gov. Scott Walker, and Sens. Tammy Baldwin and Ron Johnson are doing in the latest Wisconsin Survey. Here's a rundown of what the poll found, coupled with some historical data for context:

As far as his standing among Wisconsinites goes, the last year has not been kind to Scott Walker. His approval numbers first took a dip shortly after the introduction of the state budget in February 2015, and staying low during and after his 70-day presidential campaign. The latest numbers do look slightly rosier for the second-term governor: His approval rating has climbed about 4 points from last October. That said, his disapproval rating still outstrips that by about 12 points.

Just two years ago, Obama's popularity was languishing both in Wisconsin and nationally. However, the second-term president's numbers have been steadily on the rise since then, a trend that's borne out in the latest Wisconsin Survey. His approval rating in Wisconsin has climbed about 2 points since the fall, while his disapproval rating has dipped an equal amount to 45 percent.

Note: Due to rounding, the disapproval ratings in the chart above may be off by +/- 1 percent.

Just over halfway through her first term in the Senate, Baldwin has consistently maintained a level of popular support among constituents. It does bear mentioning, though, that as with her Republican counterpart Ron Johnson, over 20 percent of survey respondents haven't heard of Baldwin or aren't sure what their opinion of her is.

The spring 2016 Wisconsin Survey polled 616 registered voters across the state between April 12 and April 15. The margin of error is plus or minus 4 points.