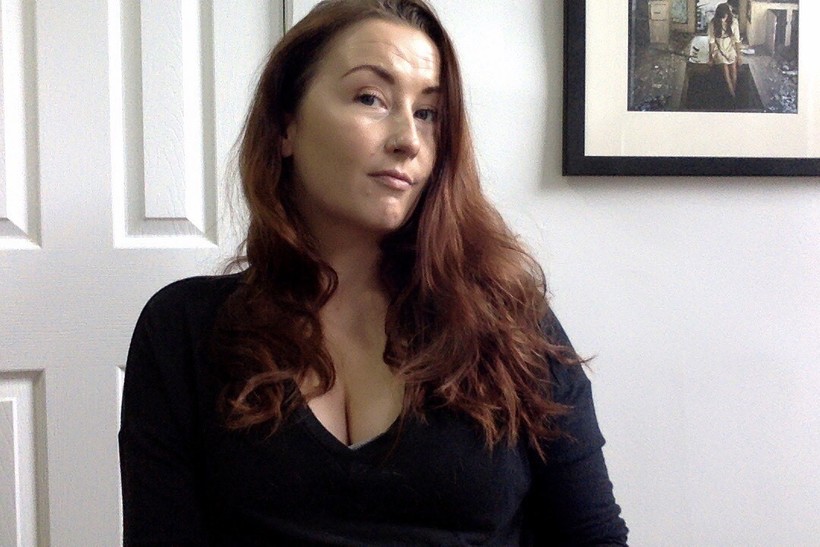 Her 'Ask A F--- Up' Column Offers Pragmatic, Poignant And Personal Advice
By Adam Friedrich
Share:

For years now, Brandy Jensen has been one of Twitter's most prominent personalities. Where many social media users and influencers construct aspirational avatars of their lives, Jensen combines a fresh openness, snark and humanity to paint a fairly accurate portrait of who she really is. That may be the very ingredient to why she's attracted over 100,000 followers.

"My Twitter voice is just my voice. It really is. I just kind of tweet whatever pops into my head. And for whatever reason other people seem to like it. I wouldn't say that there's a whole lot of distance between my Twitter voice and just me," Jensen said.

i’m so pleased he looks exactly like a guy named Mitch Guitar https://t.co/EI2ZtUDl9X

She told WPR's "BETA" that with a background in English and writing, the constraints of Twitter's character limit honed her ability to compose with clarity. And she admits that she often even thinks now in tweet-sized measures.

"Often, I'll have an opinion about something that's going on and it'll just kind of like occur to me in the cadence and the syntax of a tweet. I'll automatically try to kind of narrow it down to like, 'What is the most basic the most fundamental way that I could express this thought?'" said Jensen. "It's good at forcing you to kind of whittle down all the extraneous elements of what you want to communicate and just get it really down to basics. And that can be a good skill to have as a writer."

Jensen moved to New York from the Midwest after a divorce, using her budding Twitter brand to snag a job as a social media manager. She wound up doing social for the now defunct online publication, The Outline. It was there where Jensen began branching out and started editing articles.

"At The Outline, I floated the idea that maybe I could try to be an editor because I have a background as an English major. And so I thought that editing might be something that I would be good at. They were good enough to let me try it and it turned out that I liked it a lot," she said.

During this time, Brandy tweeted out a joke that with all of the mistakes she's made in her life, she could author a cautionary advice column. Her bosses at The Outline saw the tweet and acted on the old cliché that in every joke lies a little truth.

"I thought it would be funny if somebody gave me an advice column based on the premise that I haven't really managed to learn a lot from my mistakes, but maybe somebody else can," she said. "And then my boss, the editor at The Outline at the time, just sent me a message on Slack and was like 'You should do this. We want you to do this.' And so that's how it got started."

Jensen — a fan of the advice column format and Cheryl Strayed's 'Dear Sugar' in particular — admits that one of the bigger hurdles about an advice column is that you're limited to your inbox.

"I don't think that when people write into an advice column, they're necessarily looking for advice. I think more often what they're looking for is permission or validation," she said.

While the concept began as a joke, Jensen takes her work seriously and has risen to the task. And even though there's a lot of fun in her column, she said she tries to ground her advice in simply having people ask more of themselves.

"I think of my advice column as a little bit more practical, which I think might go some way to explaining why it's become popular," said Jensen. "I think that there is definitely a need out there to think about practical ethics, like 'How is it that we ought to behave? What is permissible? What do we owe each other? How do we live in a society with each other?' I think people are kind of returning to more basic questions like that."

Recently though, Jensen was faced with an incredibly tough question. Someone had written in blaming themselves for their father's suicide. For someone known for her snark and humor, Brandy changed gears effortlessly and handled the answer with grace, compassion and tact.

"It's very easy to meet somebody's raw grief or suffering with empty platitudes and I think that often can make it worse. So, I didn't want to make it worse."

Jensen reached out to a few friends who had lost loved ones to suicide and crafted a sincere response that prompted the letter writer to write back thanking Brandy.

"I did hear back and she did say that she found it helpful, which is, you know, all I can ever hope for," said Jensen.

Jensen wasn't sure how long her column would go on for and figured that when The Outline folded and she relocated to New Orleans that her column would wrap up too. However, it was picked up by the popular website, Jezebel and continues to thrive.

"Jezebel has a larger readership than The Outline. So, it helps the column in that sense. I think I probably get a wider range of questions," said Jensen. Although she's noticing that writing for Jezebel — tagged as 'A Supposedly Feminist Website' — has skewed the gender split in her inbox. "I got a lot more men writing to me when it was at The Outline and I would encourage men to continue writing to me, even though it's at Jezebel."

For now, Jensen is continuing on with 'Ask A F--- Up' and other funny blogs for Jezebel. She quips that she never planned any of this so what's next will likely surface in the same spontaneous spirit.

"I learned long ago that that coming up with elaborate plans for myself is just a great way to like look back and laugh later when nothing goes the way you thought it would."