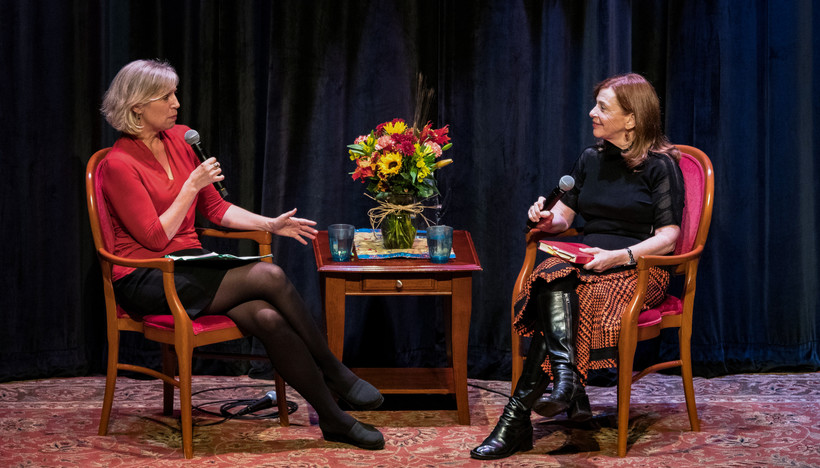 The Book Burning That Brought All Of Los Angeles Together

How The Worst Library Fire In US History Rallied An Entire City To Save 700K Books
By Shannon Henry Kleiber
Share:

Journalist and author Susan Orlean's latest book, "The Library Book," explores our connection to books and libraries through the story of the largest library fire in U.S. history at the Los Angeles Central Library in 1986.

"To the Best of Our Knowledge" host Anne Strainchamps spoke with Orlean live onstage at the Opera House in Traverse City, Michigan in October. The event was part of the National Writers Series, which is recorded and broadcast by Interlochen Public Radio.

Orlean begins with the moment she first heard about the fire.

Susan Orlean: I had just moved to LA, and I was asked to give a talk for the Friends of the Library. At the end of the talk, the head (of the group) said as a thank you, he would like to give me a tour of the downtown library. I was very excited because I didn't know LA had a downtown. And I immediately fell in love with the library.

It's quite a unique piece of architecture, a sort of blend of Egyptian and art deco, if you can imagine that. I was very taken with this place. We stopped in front of the fiction section, and he pulled a book off the shelf, and he held it up, and he took a deep whiff of the book. I didn't know what to do — do I take that same book and smell it, or do I take another book? And I really didn't know what to do.

He said, "You know, you can still smell the smoke."

And I said, "Did they used to let people smoke in the library?"

It burned for seven and a half hours and reached over 2,500 degrees. When it was finally extinguished, 400,000 books had been destroyed and 700,000 were damaged. And it was determined that it was arson.

Anne Strainchamps: So why do you think the burning of books is so horrific to us?

I was just thinking, students at Georgia Southern University burned the books of a Cuban-American novelist on a grill while she was visiting. If they had just shouted her down in the lecture, we wouldn't be reading about it in the national newspapers. It's the image of her book on a grill that is so viscerally revolting. Why is that?

SO: Books and libraries have a connection to us that is beyond the logical. They exist as a sort of extension of the human mind and spirit. And I think we feel that deeply, as if a book has a soul. At the base of that is the fact that books are immortal — books can be the one thing that we can't be. There is a mystically potent quality that a book has.

AS: Isn't there an African proverb "When an old man dies, a library burns"?

SO: That became the kind of organizing principle of the book to me. I had come across that expression and about halfway through working on the book, my mother was diagnosed with dementia, and suddenly I began understanding the meaning of that proverb that her internal library was burning down. Her memories, her knowledge was disappearing almost volume by volume.

And similarly, a library is a communal mind. So when you lose a whole library, you lose the shared mind of a society. The Nazis had a squad that was assigned one mission: seek out and burn libraries purely for the emotional and psychological terror that it filled people with.

Some of the most poignant scenes to me in the book are about the librarians who worked in that LA library and saw the library burn. Many of them stood there for the whole seven hours watching it, heartbroken. And then they spent all those following years doing what they could save some of the books.

SO: They really were amazing. For them, it was utterly devastating. The city employed psychologists to meet with them and work with them because people were traumatized.

Many of them then got involved in the amazing process of restoring those 700,000 books that were damaged. They had to be frozen solid — they were wet, and you either have to dry a book within 48 hours, or it's going to mold and it'll be ruined forever. So if you can't dry it quickly, you have to freeze it.

AS: They’re calling Bird’s Eye and saying, "Can you move the frozen peas aside?"

SO: That's exactly what happened. I was saying to somebody, "Do any of the books smell like broccoli?" because they were stored next to frozen food for seven years.

But then it's a very complicated thing. These books had soaked up hundreds of gallons of water. So McDonnell Douglas in the Jet Propulsion Lab got involved in trying to figure out: how do we dry these books? They put them in chambers that are used to test the equipment that goes into outer space. It was the largest book restoration project ever undertaken.

AS: Don't you love this image of the book as one of the oldest technologies with the most contemporary technology used to save it?

SO: There were a lot of good things that came out of this epically bad event, and that was one of them.

The way the people of LA came together to save the library.

They had to remove the 700,000 books. That in itself was a major undertaking.

Thousands of people in LA showed up the next day, put on hardhats and formed a human chain and passed the books out of the library.