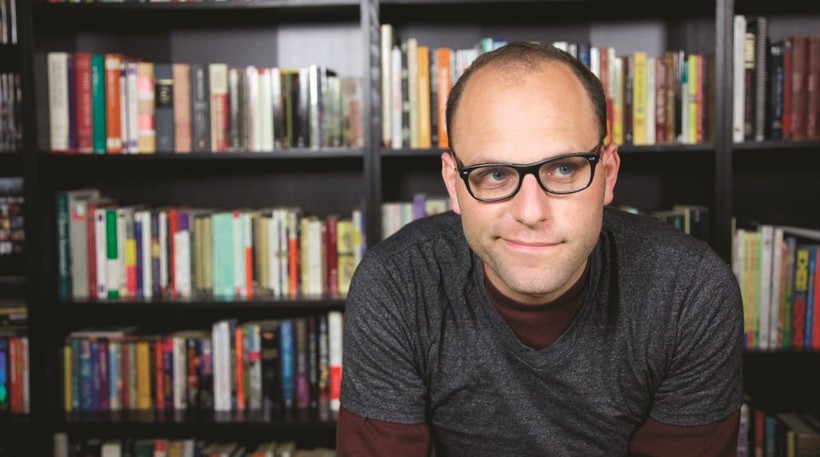 A BoJackian Strain Of Melancholy Permeates These Stories About Love
By Doug Gordon
Share:

The Netflix animated series "BoJack Horseman" centers on the trials and tribulations of a depressed sitcom star in his 50s, who also happens to be a horse.

Raphael Bob-Waksberg is the creator of "Bojack Horseman." He’s also the author of a short-story collection called "Someone Who Will Love You in All Your Damaged Glory." Like "BoJack," Bob-Waksberg's stories strike a perfect balance of melancholy, humanity and love.

One of the stories is called "the poem." It starts out as a poem written by Fernando for his girlfriend Wendy but then it pivots into a short story while still maintaining the meter and rhyme of a poem.

"One thing I try to do in all my stories is justify the form with the content," Bob-Waksberg told WPR's "BETA." "So a lot of times, I'll think of the form first ... I really wanted to do a story in verse. You know, I'm a big fan of David Rakoff's book, 'Love, Dishonor, Marry, Die, Cherish, Perish,' which is an entire book written in verse. And I always enjoy writing little poems here and there. So I thought, 'Could I write a whole story that was a poem?' Then I thought, 'Well, what would justify a story being a poem?' Well, if it's about a poem, that feels like a good place to start."

When Bob-Waksberg first came up with the idea for "BoJack Horseman" in 2010, he wrote that he envisioned the show as "darkly funny with a melancholy, 'Great Gatsby'-ish center."

He said the same description could apply to his new collection of short stories.

"I think that depending on your own emotional constitution, you might find the stories in this book to be very funny or you might find them to be very sad," he said. "And I've seen both that reaction, which I think is very interesting. They are, I think, funny mostly. But there's a dark comedy to them and there certainly is a melancholy center to a lot of them."

"I think that tragedy and comedy, that's life, right? It's all kind of funny and sad. And the way we muddle through it can be inspiring and devastating and hilarious and stupid. And I kind of want to track that gamut in my work. I think that real life has all of those modes. It's a sweet and salty mix of all of it. And that's something that I definitely try to convey in my work," Bob-Waksberg added.

His short story, "A Most Blessed and Auspicious Occasion," is one he said may be the most autobiographical — it's very loosely based on his wedding.

"I want to be very clear. There were no goats sacrificed at our wedding," he said chuckling.

He said that when he and his girlfriend decided to get married, they wanted to keep the wedding very small and very simple.

"And I was really continually shocked in the planning of the wedding how even trying to keep it small and simple, how it became quite an ordeal," he said. "And, you know, all the people we had to please and all the things we had to do, also to please ourselves, based on our own expectations of what a wedding was and needed to be. And how even this very small version of it ended up being quite overwhelming but in the end quite beautiful as well."

This story reads like an attack on the wedding industrial complex — also known as Big Wedding — and its relentless attempts to monetize nuptials as much as possible.

"There's the wedding industry but there's also the wedding culture," Bob-Waksberg said. "It's so ingrained in what we imagined for ourselves ever since we were little kids, of what our wedding would be like and what the perfect wedding is and what it means and what it represents. And I think that means something a little different to everybody but it's all kind of wrapped around this cultural ideal based on the culture that we swim in."

The story "Rufus" is written entirely from the point of view of a dog named Rufus. Bob-Waksberg said his wife's dog inspired this story. He didn't have any pets growing up and he never really understood dogs. It became a running joke with his friends that he was very uncomfortable around dogs.

"And then I started taking care of first my girlfriend's dog and then it became my wife's dog. And now he's my dog, as well," he explained. "And I really fell in love with him and became delighted by him. And I was really fascinated in his understanding of me and my role in his life. And I felt like a lot of the fictional representations of dogs I'd seen had either been very stupid or all-knowing — kind of like 'Oh, my master doesn't understand that he's in love with this person but I'm going to wrap my leash around them and get them together. Or whatever.' And I felt like neither was quite true of my dog. And I felt like my dog was very smart but just his context was completely different than mine. And I tried to imagine what the world would look like through my dog's understanding of it."

But just because BoJack has been such a large part of Bob-Waksberg's work, doesn't mean his character finds his way into his short-story collection.

"I think I really kind of got my BoJack kicks out on the show and I was interested in exploring other worlds in the book," Bob-Waksberg said. "Although I will say there is a strain of melancholy that kind of lives in the veins of BoJack, the current of his life. And I think that strain of melancholy certainly exists in a lot of the characters in the book. There's a story called 'Move across the country' which is about a character trying to outpace their own depression by picking up their roots and moving around. And I think that is very Bojacky — that idea of 'I'm miserable here but maybe if I go somewhere else, I can be less miserable.' And that misery kind of following you."