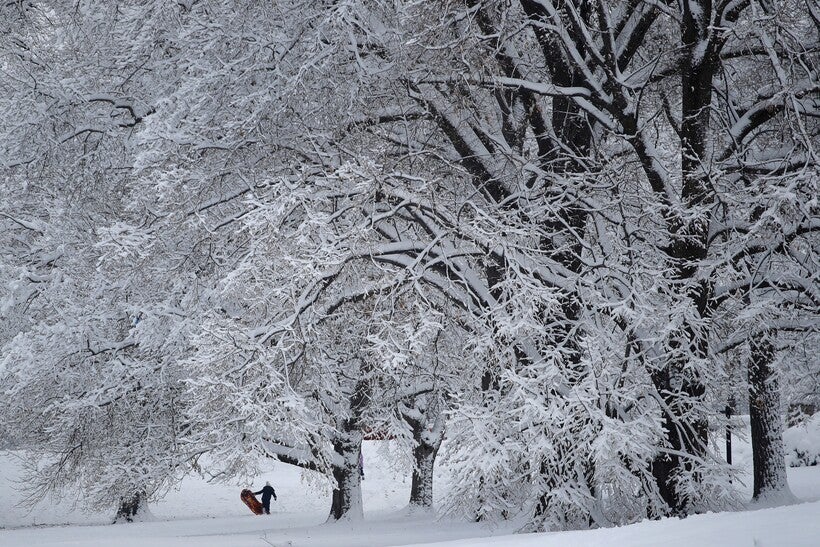 A large swath of Wisconsin is digging out after a substantial winter storm caused school closings and delays for drivers.

Steady snow fell overnight Tuesday with the brunt of the storm arriving Wednesday morning. The National Weather Service issued a winter storm warning until noon Wednesday for parts of central, northeast and most of southern Wisconsin.

Forecasters have said they expect the storm to deliver as much as 10 inches of snow. Much of the southern part of the state has seen at least half a foot, said Tim Halbach, warning coordination meteorologist with the National Weather Service in Sullivan.

"Most people at a minimum got 4 inches of snowfall," Halbach said. "There's quite a few reports of about 6 inches. A few people here and there have been a little higher in that 7, 8, 9 range."

Halbach said Sun Prairie has the most snow so far with about 9 inches as of late Wednesday morning.

Early Wednesday, forecasters expected Madison and Milwaukee to get 5 to 9 inches of snow by the time the storm relents. Fond du Lac, West Bend and Sheboygan could get 6 to 10 inches, while residents in the Fox Valley can expect 4 to 7 inches.

The last of the storm should move out of the state by early afternoon, Halbach said.

Most accumulations end by the afternoon, but a few light snow showers may linger in central and eastern portions of the area. #swiwx pic.twitter.com/8eIwRn7oeM

The snow, which continues to fall in some areas, is slowing commutes and leading to accidents.

The National Weather Service and Wisconsin Department of Transportation are urging drivers to take it slow and plan extra time for the commute.

Most highways in southern WI are still snow covered. Remember these steps if you have to travel today:
✔️ Plan ahead and check https://t.co/tEYNFnTTov BEFORE you leave.
✔️ Buckle up!
✔️ Leave room to brake: 🚚---🚗---🚙
✔️ Both hands on the steering wheel. Put down the phone! 📵 pic.twitter.com/V0NJYfCBqW

The next major weather event is expected to be the arrival of very cold temperatures Thursday night, with the wind chill dropping temperatures to well below zero.

Halbach said highs Friday may not get above zero.

"Temperatures on Friday might not get above zero, and if that were to happen, that'd be the first time since January 2014 that that failed to occur," Halbach said.

Halbach said the weather service may issue some wind chill advisories going into the weekend.