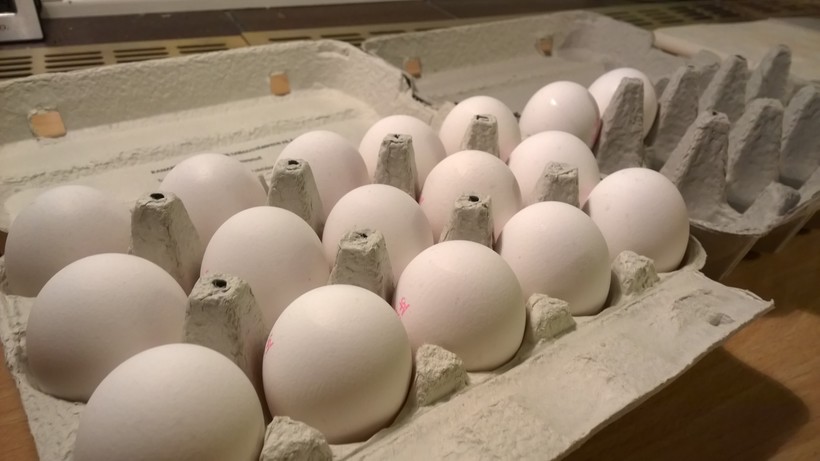 Outbreak Has Hit The Midwest Hardest, And Is Driving Up Egg Prices
By Scottie Lee Meyers
Share:

A free-range egg producer in Wisconsin says the recent outbreak of bird flu revealed lapses in biosecurity within the industry that helped the disease spread.

"We were not on the top of our game biosecurity-wise early in the infection stage," said John Brunnquell, CEO of Egg Innovations. "What we found is that once we had the first infection, among other things, we as an industry unfortunately did a very good job of spreading it around ourselves to industry partners."

The outbreak has now been detected at 223 farms, according to the U.S. Department of Agriculture, and has reached 15 states. It’s the largest outbreak in U.S. history, and it’s been particularly ravaging farms in the Midwest.

With 10 confirmed detections, Wisconsin is among the hardest hit by the outbreak, behind Iowa, Minnesota and Nebraska. Almost 2 million total birds in Wisconsin have been affected, according to the U.S. Department of Agriculture.

Brunnquell said the virus was able to spread by traveling with unsuspecting farm workers — some of whom work at several operations — on the bottom of their boots or on their clothing. It also proliferated by vehicles.

To prevent further infections, Brunnquell said his company and others like it have adopted new measures: Employees have to enter facilities wearing single-use disposable garments. All cars and trucks get washed and sanitized between every visit, and traffic itself has been limited.

He added that Egg Innovations and other egg producers took pride with the measures they already had in place, but that this particular strain of avian flu, H5, was particularly resilient.

"When (the outbreak) subsides, we will remain at an elevated level of biosecurity just because we are smarter now," Brunnquell said.

Egg Innovations has operations throughout the Midwest, including 11 farms in Wisconsin.

The outbreak has led to a rapid rise in the price of eggs. Restaurants and bakers who buy liquid and powdered eggs in bulk have been concerned about the higher prices, and sometimes have passed along the expense to customers.

"We do believe that has peaked and in some cases is now softening," said Brunnquell. "The unknown factor is when we got into the fourth quarter, which is a typically heavy-demand period due to Thanksgiving and Christmas."

Secretary of Agriculture Tom Vilsack was in Milwaukee recently for an event with the Hunger Task Force. While there, he told NPR’s Weekend Edition that the outbreak does not pose a health risk to consumers but it has had a devastating effect on producers.

The wholesale price of a dozen large Midwest eggs increased from a little more than a dollar in late April to about $2.40 as of June 10, according to the U.S. Department of Agriculture's weekly shell egg report.

Last week, the USDA announced it would allow egg imports from the Netherlands, which is expected to lower prices.