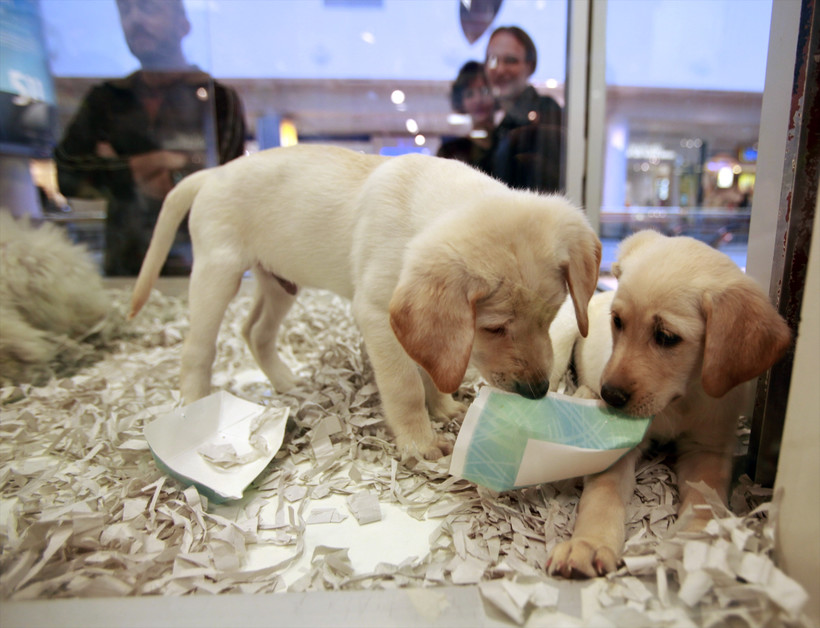 In this Monday, Oct. 4, 2010 photo, window shoppers look at a pair of Labrador puppies for sale at the Westside Pavilion Shopping Center in Los Angeles. Damian Dovarganes/AP Photo

Bill Would Go After Pet Stores That Sell Dogs, Cats

Violators Could Be Fined Up To $10K On First Offense
By Elizabeth Dohms
Share:

Pet stores in Wisconsin that sell cats and dogs could face fines under a new bill that aims to close off a pipeline from puppy mills, but opponents say the legislation's restrictions will have unintended consequences, such as forcing some businesses to close.

Authored by state Rep. LaKeshia Myers, D-Milwaukee, the bill would prohibit pet stores from selling dogs and cats, starting on Jan. 1. Violators would be subject to a $10,000 fee on the first offense and $25,000 for each occurrence after that.

"I'm seeing a lot of support from both sides of the aisle," Myers said.

The bill supports the idea of pet stores inviting humane societies or animal shelters to display animals available for adoption.

"We don't want to see puppy mills occurring and also having animals sold," she said. "We want to use shelter animals as much as possible."

Puppy mills are commercial dog breeding facilities known for unclean and unethical treatment of animals that the breeders and dealers sell for profit.

Legislation from 2009, Act 90, addresses that by restricting the sale of puppies younger than seven weeks unless the animals are sold with their mothers. It requires certificates of veterinary inspections for dogs that are sold. Licenses and inspections are mandated for dog breeders, dealers and sellers.

According to the Humane Society's annual report, seven puppy mills were identified in Wisconsin. Myers said this bill takes the puppy mill ban of 2009 a step further.

Mike Bober, president and CEO of the Pet Industry Joint Advisory Council — a group that represents breeders, distributors and retailers — said what's "unfortunate" about this bill is that the consequences of it will fall on pet store owners.

Wisconsin has some of the nation's most comprehensive regulations that inform animal care, Bober said. The state Department of Agriculture, Trade and Consumer Protection oversee all dog sellers and make unannounced inspections and follow up on complaints.

"(This bill is) not going to do anything to put the big, bad breeders outside the state out of business the way the advocates might suggest," he said. "That does not get passed back to the breeders because so few dogs are coming from breeders through pet stores."

Illegally sourced animals are offered to the public through roadside sales, Craigslist ads and other online methods, Bober said.

"This tends to be where a lot of people end up going and in fact where they're driven, even more frequently when a ban goes into effect," he said, pointing out that only about 4 percent of all dogs that end up in someone's home actually come from a pet store. That number is probably lower in Wisconsin, he said, because there are fewer independent business that offer dogs for sale in that capacity.

Bober fought back against the sentiment that animals in pet stores are stressed out, saying they actually have a higher level of social interaction with people because of customers coming into the store.