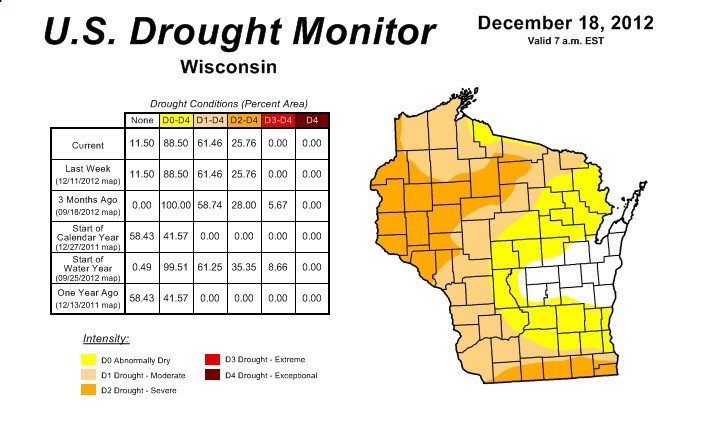 Powerful winter storms like the one that shut down much of the southern half of the state this week are impressive. But even though up to 19 inches of snow were left in its wake as the system moved on it doesn't amount to much in terms of liquid water. Mike Welvaert is a Hydrologist with the National Weather Service in La Crosse. He says even in its heaviest and wettest state the snow to water ratio is least ten to one. That means those 19 inches of white stuff most likely work out to less than an inch of rainfall. But Welvaert says this storm and another that hit farther north will help with the state's drought because warm temps have kept the soil from freezing.

"So in a way that's good, so this snowfall we did get as it melts it will percolate down into the soil and help improve the top two or three inches of soil moisture as we go through the winter," he says.

But Welvaert says droughts are long term problems and it'll take more than 19 inches of snow to bounce back.

"We've had dry conditions for many months around here so one or two particular snowstorms are not going to impact it greatly," he says. "It's going to be the frequency of precipitation that we get throughout the winter.

Tim Asplund heads the water monitoring program for the Department of Natural Resources, and agrees that the warmer ground temperatures will help to recharge groundwater levels but says parts of Wisconsin are down five inches of rain or more.