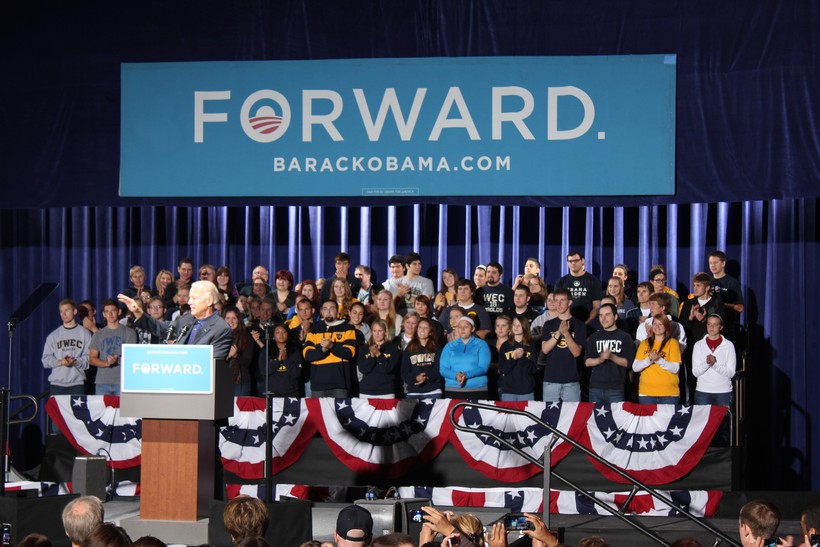 Vice President Joe Biden campaigned in Eau Claire Thursday and was tailed by a faction of the Romney Ryan campaign, confirming Wisconsin's status as a battleground state. According to the campaign, 3,000 people piled into a small arena at the UW Eau Claire Campus to see the vice president.

Biden mainly talked about investing in education as a way to grow the nation's economy. He defended administration spending on things like early learning, expanded Pell grants and tax breaks for families putting kids through college. Biden says, in order to be competitive, the U.S. must be the single best education nation in the world. "That's why America will have the highest percentage of graduates from college of any nation in the world by 2020."

Biden then talked about the Romney/Ryan budget plans that he says include extending tax breaks for affluent Americans at the expense of blue-collar workers.

Biden finished his speech by criticizing Republican claims that America is in decline. He says Romney and Ryan are wrong to say the country has developed a culture of dependency. "I've got news for Governor Romney. I've got news for Congressman Ryan. Gentlemen, it's never, never, never been a good bet to bet against the American people."

During the Biden visit, a Romney campaign bus filled with supporters circled the campus. Republican Party of Wisconsin Spokesman Ben Sparks says the Vice President's visit is proof that the Obama campaign is afraid of losing Wisconsin. "President Obama came into office and won by 14 points, and now Vice President Biden is visiting the state twice in one month. They are now running TV ads. They are running scared."

This was the first visit by a sitting vice president to Eau Claire since Dan Quayle made the trip during the first Bush administration.