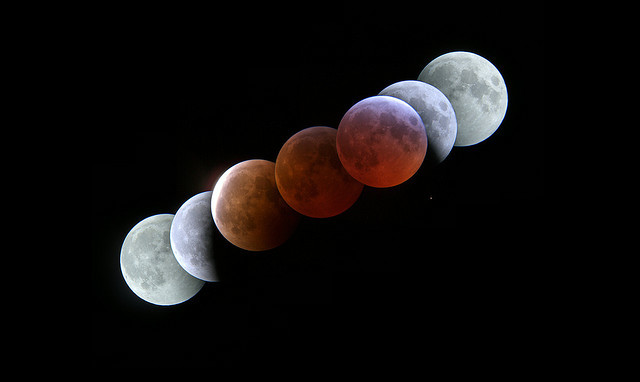 The Best Way To Watch A Late-September Lunar Eclipse

Even the most casual of stargazers will have a good chance later this month to witness a spectacle in the night sky: A full lunar eclipse will be visible in much of the United States on the evening of Sept. 27.

According to Jim Lattis, director of the University of Wisconsin Space Place, the planets are aligning — in this case quite literally — to offer easy access to an interesting astronomical event.

"One of the nice things about lunar eclipses is they happen slowly. They last hours … unlike, say, with a total solar eclipse where the totality lasts only a matter of minutes, and you've got to be at just the right place at just the right time," said Lattis.

"This is much more convenient," he added.

In Wisconsin, Lattis said, the eclipse should start to become visible just after 8 p.m., with full effect coming at 9:47 p.m.

And what will watchers actually be seing?

"What's going on is the moon basically passes through the Earth's shadow. The Earth casts a shadow out into space, you know, opposite the sun," Lattis explained. "Normally what we see is the fully illuminated face of the moon — the full moon. But when things are just right, which happens a couple of times a year in theory, then the full moon can actually pass through the Earth’s shadow, and that’s a lunar eclipse."

Lattis said the Earth's curved shadow will be seen sliding across the face of the moon, which will turn much darker and take on a reddish glow as sunlight passes through Earth's atmosphere.

While training binoculars or a telescope on the moon will give people a more detailed view, Lattis said the eclipse will still be quite impressive.

"You just don't need, you know, any preparation at all. A lawn chair? Kind of like with meteor showers, it's one of those things where you just want to get comfortable for a little while," he said.