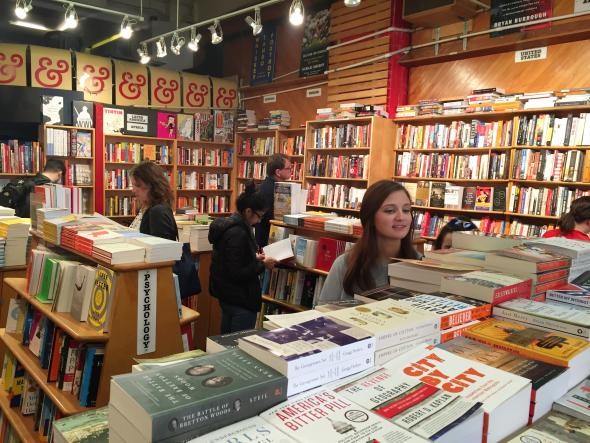 Nancy Pearl, Daniel Goldin Rank The Best Books Of The Year, Which Are Perfect for Last-Minute Holiday Gifts
By Scottie Lee Meyers
Share:

'Tis the season for reflecting on the best books of the year, and who better to offer recommendations than Nancy Pearl, a librarian so popular an action figure has been made in her likeness, and Daniel Goldin, the independent bookstore owner here in Milwaukee who was recently called an "internal fire" and "stupendously great bookseller" in The New York Times.

Whether you need a last minute gift idea or an introduction to a new author, you can rely on their favorite books of 2016 lists, which includes works from across genres.

While the two had overlapping picks, the one book they both had on the top of their lists was Matthew Desmond's "Evicted: Poverty and Profit in the American City." Based on years of embedded fieldwork in Milwaukee's poorest neighborhoods, it examines how evictions result in extreme poverty and economic exploitation. It earned Desmond, who studied sociology at the University of Wisconsin-Madison, a MacArthur "genius" grant.

"I tend to always seek out books of investigative journalism," said Pearl, an author in her own right and former Librarian of the Year. "I think in the right hands you learn so much, and you experience so much. And I think that Matthew Desmond's book is one of the best we've seen in quite a while. Even the writing escapes the newspaperese that you sometimes get in books of this sort."

Before appearing on Wisconsin Public Radio, Desmond gave a book talk at Goldin's bookstore, Boswell Book Company, that was well attended by department heads in city hall who were eager to learn about the stories of those struggling with housing issues.

"He's a storyteller, and he takes those people and he brings them to life, and it's like they're all your best friends," Goldin said.

Below are Pearl's and Goldin's other book recommendations for 2016.

1. "Moonglow: A Novel" by Michael Chabon

2. "The Mothers" by Brit Bennett

3. "Hero of the Empire: The Boer War, a Daring Escape, and the Making of Winston Churchill" by Candice Millard

4. "Everyone Brave is Forgiven" by Chris Cleave

1. "The Underground Railroad" by Colson Whitehead

3. "News of the World: A Novel" by Paulette Jiles

4. "The Undoing Project: A Friendship That Changed Our Minds" by Michael Lewis

5. "Speaking American: How Y’all, Youse , and You Guys Talk: A Visual Guide" by Josh Katz