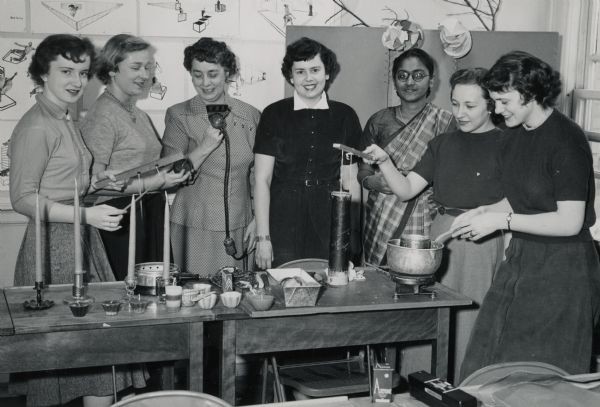 During her 32 years as the host of "Homemakers Program," on WHA, Wisconsin Public Radio's original AM radio station, Aline Hazard covered topics ranging from food preservation to cheesemaking to women entering the workforce during World War II.

But according to historian Erika Janik, Hazard’s most important contribution to the state may have been the connection she made with her listeners.

"People saw her as a trusted friend, and we find that comment over and over again in people’s letters," said Janik. "She really made an effort to be that friend and guide people that were listening to her."

Hazard was inducted into the Wisconsin Broadcasters Hall of Fame earlier this year more than 80 years after she first took to the air in 1933. From the beginning, she saw the "Homemakers Program" as a way to provide practical information to improve people’s lives.

"She really wanted to make people’s lives easier, and she really saw herself as doing a service to people," said Janik.

Hazard used her connections in the University of Wisconsin-Extension and the College of Agriculture and Life Sciences to bring in experts on topics including textiles, gardening and vocational training. In 1935, she began doing programs called "on-the-spots" which brought her show out into the community. Hazard saw it as a way to connect with listeners.

"She went to cheese factories to talk about the process of making cheese," said Janik, "And during World War II, as a lot of women were going into the workforce, she went to visit women who were working different jobs around the city to talk about how they managed their home lives."

Hazard’s efforts to connect with her listeners clearly had an impact across the state. In 1962 she received more than 10,000 letters from listeners. Three women from Janesville wrote her a letter that said, "Your varied programs are of great interest and help for homemakers, mothers and those of us needing a broader horizon."

"She recognized that a lot of her listeners were leading isolated lives," said Janik. "Mrs. Hazard became that neighbor, that friend they could go hang out with for a couple hours."