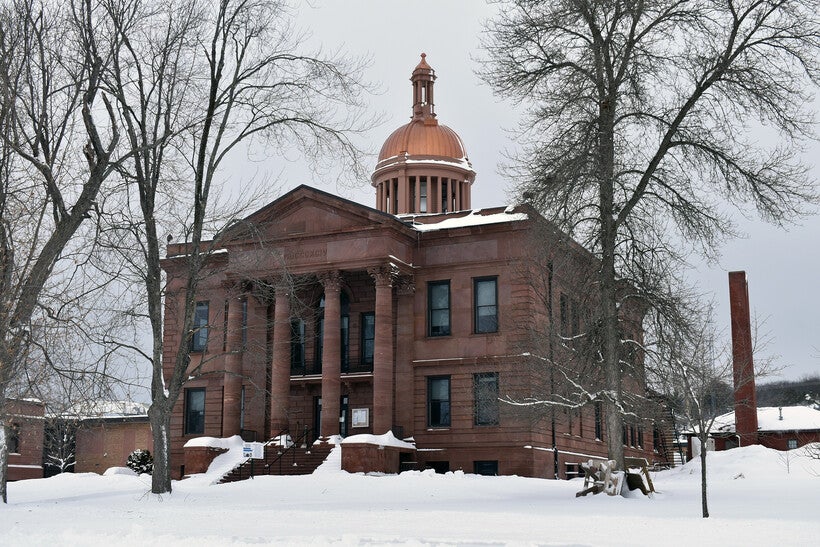 Xcel Energy and Bayfield County are partnering on a microgrid project that would be able to power the county's courthouse and jail in the event of extreme weather.
Danielle Kaeding/WPR

Far northern Wisconsin has faced several extreme floods in the last decade that have caused tens of millions of dollars in damage to infrastructure while also cutting off power for some living in the region. Now, Xcel Energy and Bayfield County are partnering to build the first microgrid through a utility program designed to promote resiliency and keep the lights on.

The microgrid will allow the county’s jail and courthouse to operate independently of the main power grid, which would draw power from a mix of solar, battery storage and a backup generator.

Microgrids supply a network of customers with energy that’s separate from a utility’s service, which can be switched on or off as needed. They provide more resilience and reliability for customers when outages occur on the main grid, and they can also minimize power disruptions by reducing demand on a utility’s system.

The project is funded through the help of a roughly $273,000 grant from the Public Service Commission’s Office of Energy Innovation. Bayfield County Administrator Mark Abeles-Allison said the goal is to maintain essential government services during extreme events, such as intense floods and severe winter storms.

"Having this backup energy, having this resiliency, we can also serve as a resource for the public if there's a long-term outage here in Washburn, or in other areas, the county can open up facilities for the public in those extreme situations," Abeles-Allison said. 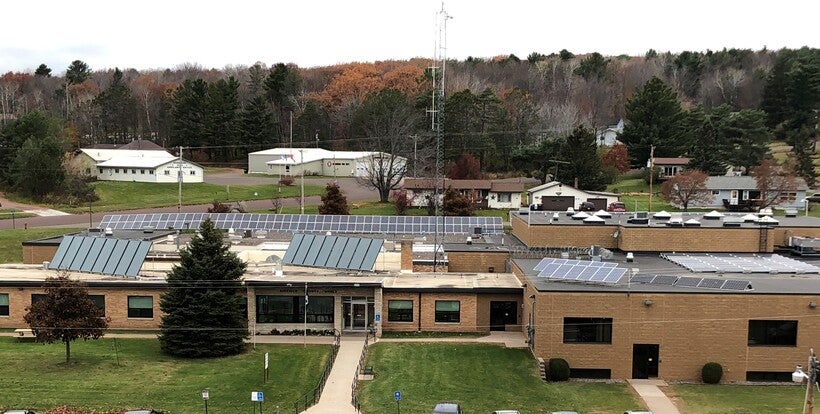 Abeles-Allison said the region is facing more frequent, extreme weather events that have caused temporary power outages, requiring the county to rely on a backup generator. Northern Wisconsin has experienced three 500- to 1,000-year storms in the last decade, which was the state's wettest on record. Average precipitation has increased 17 percent, or about 5 inches, since 1950 due to climate change, according to a report released last year by the Wisconsin Initiative on Climate Change Impacts.

Bayfield County’s microgrid will be powered by a 116-kilowatt solar system along with battery storage and the county’s existing backup diesel generator. David Robinson, Xcel’s strategic energy solutions manager, said the utility's system is reliable the vast majority of the time. Even so, customers have expressed interest in a level of resiliency beyond its standard service. The microgrid will not only benefit Bayfield County by improving reliability of power during extreme scenarios, but it can also benefit the utility by decreasing the load on the utility’s system at times of peak demand.

"They will be able to basically go into island mode, as we call it. And, from an Xcel Energy standpoint, they will, from a load standpoint, they’ll kind of disappear," Robinson said.

During those times, Bayfield County will realize cost savings on its utility bill by not drawing power from Xcel’s system.

"It's probably closer to $15,000 or $16,000 in savings each year because of the microgrid," Bill Bailey, board president for Chequamegon Bay Renewables, said. 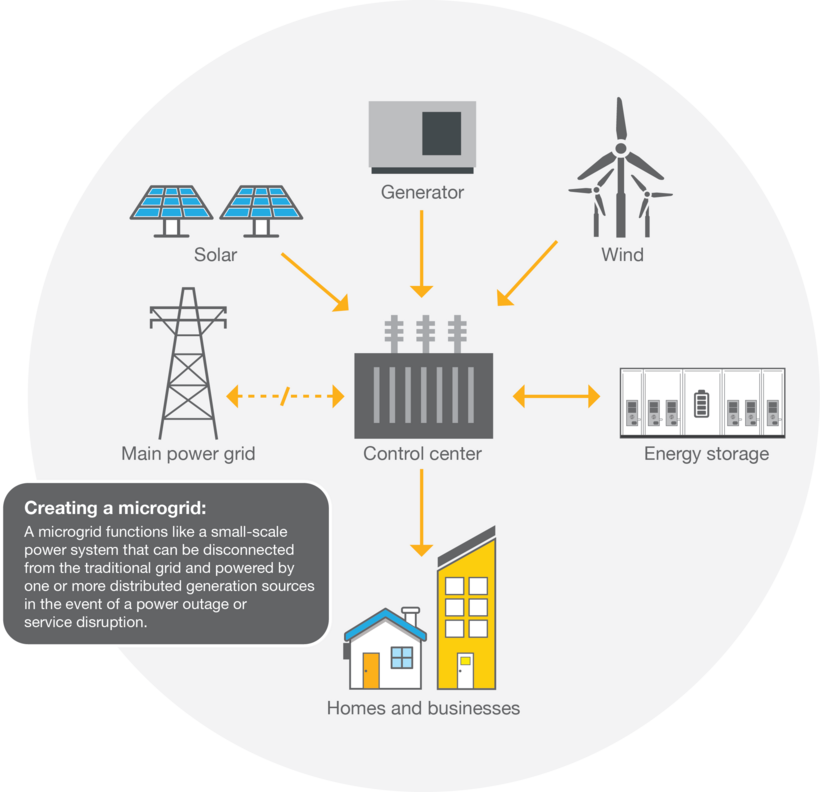 An illustration showing how a microgrid works.
Graphic courtesy of Alliant Energy

Meanwhile, Xcel is modifying its grid to couple the courthouse and jail behind a single power feed that will allow the buildings to operate together. In the event of a power outage, the buildings will switch over to drawing power from the solar and battery system along with the backup generator. Bailey said the microgrid will utilize smart controls that can make decisions about when it’s best to connect or disconnect from the utility’s system.

"It has machine-learning capabilities, so that it’s basically artificial intelligence," Bailey said. "If it makes a mistake, it’s going to learn from that, and so the next time it’s going to try to do better."

The microgrid is not the first such project in Wisconsin or the region. The Bad River Band of Lake Superior Chippewa built a microgrid following the 2016 flood that cut off power to reservation facilities and access to major highways in northern Wisconsin.

"Whenever a community experiences a very disruptive event, a microgrid can be the one place in the community where the electricity remains on, the service to communications, and in some cases refrigeration, whatever is needed to help the community weather the storm," Michael Vickerman, RENEW Wisconsin’s clean energy deployment manager, said.

Vickerman added a utility could derive benefits from installing microgrids on the fringe of its territory that may be subject to outages. He said that’s the case with a microgrid developed by Alliant Energy for 120 customers in the village of Boaz in Richland County. 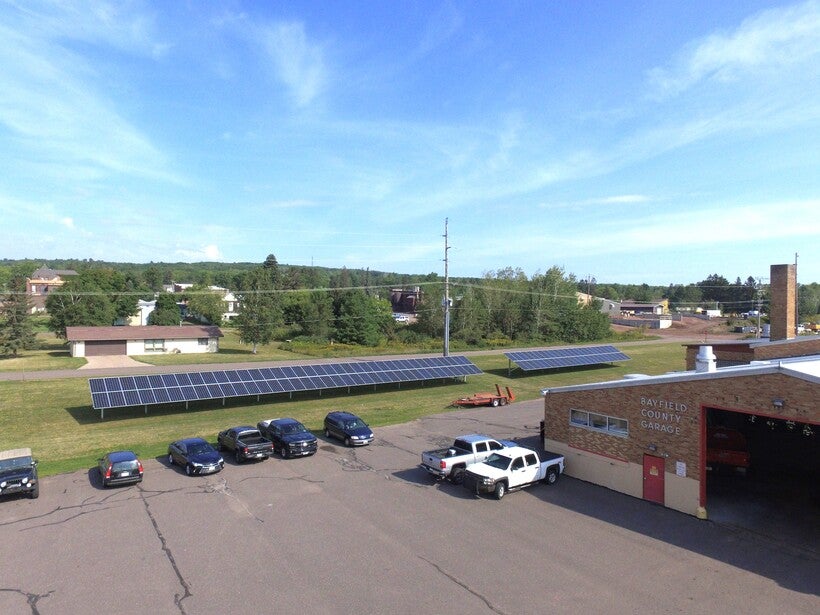 Bayfield County hopes to have its microgrid operational by this summer. The county also hopes to pursue five more microgrids with Xcel on its county highway garages to ensure snow plowing, road maintenance, and emergency response due to extreme weather.

Under Xcel’s program, the utility would own and operate microgrid equipment and pay for the upfront installation with a minimal upfront charge to interested customers. Those who want to take part in the program would then pay for that service over time under a 10-year agreement. The cities of Eau Claire and La Crosse have shown interest in using the utility's program. The UW-Eau Claire Foundation has also expressed interest in Xcel's program as it replaces Zorn Arena with its roughly $100 million Sonnentag Complex, which could serve as a public shelter in the midst of a natural disaster.

Improving the reliability of Wisconsin’s energy system is one of the objectives of the state’s Clean Energy Plan. That plan recommends ways to boost local resilience through programs and incentives, such as the commission’s grant program that provided funding for microgrid projects. The Office of Energy Innovation is accepting applications for $10 million in funding through Monday, Jan. 30.

The commission is also accepting public comment on more than $5 million that’s available to the state and tribes this year through the Bipartisan Infrastructure Law for enhancing the resilience of the electric grid. The funding, along with incentives for battery and energy storage under the Inflation Reduction Act, will create more opportunities to install microgrids across Wisconsin.

The commission is accepting comments on uses for the infrastructure law funding through Tuesday, Jan. 31.