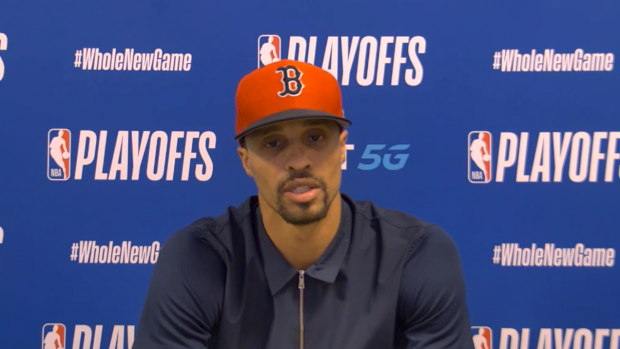 Milwaukee Bucks point guard George Hill addressed the media after the team's playoff win on Aug. 25, 2020, but he didn't want to talk about basketball, he said. The interview came the day after police in Kenosha shot Jacob Blake in the back. Megan Hart/WPR

'Basketball Shouldn't Even Be On Our Mind Right Now': Wisconsin Athletes Speak Out On Jacob Blake Shooting

Milwaukee Brewers reliever Devin Williams took the mound Monday at Miller Park in the seventh inning of a game against the Cincinnati Reds. The stadium is about 45 minutes north of Kenosha, where police shot 29-year-old Jacob Blake in the back Sunday.

With his foot, Williams wrote "BLM" in the clay. Then he struck out the side.

Wisconsin athletes and teams have been vocal about social justice since protests began in May following the deaths of George Floyd and Breonna Taylor, who were killed by police in separate incidents. But the shooting in Kenosha hits even closer to home.

In June, Milwaukee Bucks players marched with protestors, and the team hosted its own social justice demonstration outside Fiserv Forum. Now, the Bucks are in the NBA’s Orlando bubble.

"First of all, we shouldn’t have even came to this damn place, to be honest," point guard George Hill said Monday in a post-game news conference. "I think coming here just took all the focal points off what the issues are."

The press conference happened after the Bucks had beaten the Orlando Magic 121-106 to take a commanding lead in their first-round playoff series. But Hill didn’t want to talk about basketball.

"We should talk about the Blake family and what’s going on. Like I said, it’s devastating, and basketball shouldn’t even be on our mind right now," he said.

Kenosha police shot Blake multiple times in the back, in front of his three children. Blake’s father told the Chicago Sun-Times that his son is paralyzed from the waist down.

After Monday’s game, small forward Khris Middleton said that the Bucks still hadn’t yet discussed the incident as a team. Middleton, a native of Charleston, South Carolina, said it’s not the first time an event like this has happened in his community. He thinks America is starting to understand why people of color are often afraid of the police, he said.

"It’s because at any time, no matter what type of position and no matter what they did, right or wrong, their first act is to shoot us," he said. "That’s a very scary situation to be in when they’re supposed to protect us."

The Bucks franchise issued a statement on Monday saying that the organization was "praying for the recovery of Jacob Blake."

"Our organization will continue to stand for all Black lives as we demand accountability and systemic change on behalf of George Floyd, Breonna Taylor, Sylville Smith, Ernest Lacy, Dontre Hamilton, Tony Robinson, Joel Acevedo and countless other victims. We will work to enact policy change so these incidents no longer exist," the statement read.

Coaches have also weighed in, with both Bucks coach Mike Budenholzer and Brewers manager Craig Counsell discussing the shooting in pregame interviews.

"We've got a systemic problem that we need to address, and we all need to educate ourselves. Whether you agree or disagree with what I'm saying, I think it's important that we continue to think, we continue to pursue policy change, we continue to act, because there's violence happening that just absolutely should not be happening," Counsell said.

"There’s a systemic problem and until the problem is fixed, this is going to be an all-too-common sighting in this country," he said. "It obviously hits home being not far from Green Bay."

Rodgers said he hopes leaders in Madison will take steps to address structural racism. On Monday, Gov. Tony Evers signed an executive order calling on the Legislature to convene next week in a special session to take up bills on police accountability.

Athletes outside Wisconsin also spoke out against the shooting in Kenosha, which has made national headlines.

"I know people get tired of hearing me say it, but we are scared as Black people in America," Los Angeles Lakers star LeBron James said Monday, before questioning why the incident escalated to the point where shots were fired.