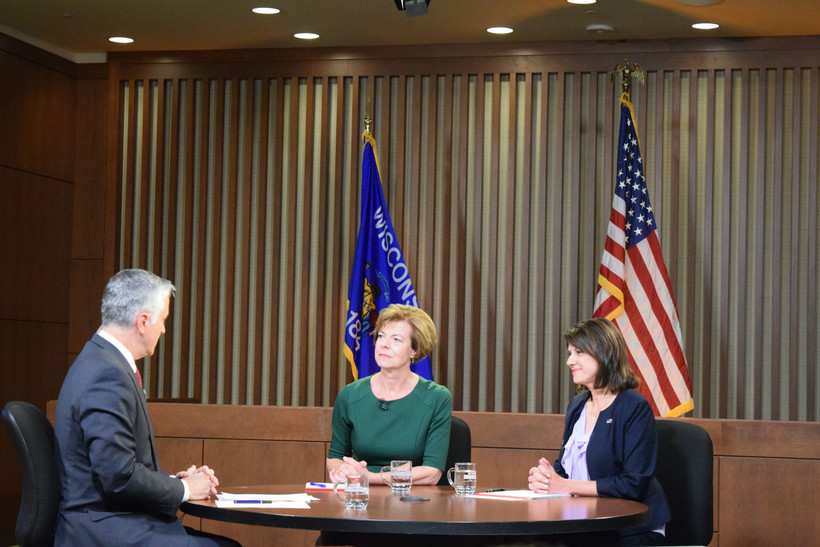 Baldwin, Vukmir Weigh In On Foreign Policy In Final US Senate Candidate Debate

During the campaign, the two women have focused a lot of their energies on health care, veterans issues and immigration. They did so again at Marquette University Law School during the hour-long debate while weighing in on trade, NATO and President Donald Trump's performance.

Asked if this election was a referendum on President Donald Trump, Baldwin said Wisconsinites were focused on issues like health care and the Republican tax plan passed earlier this year.

"I don't think it's Trump, I think it's about these issues that affect us very intimately," Baldwin said.

"President Trump has been very successful in the two years that he's been in office, and what we have done in Wisconsin really mirrors what the president has done," Vukmir said, citing regulatory reform, a booming economy and GDP growth as accomplishments achieved through limited government.

The passage of the Obama-era Affordable Care Act has been central in the ongoing health care debate.

The state of Wisconsin is currently challenging the ACA in court, a move Wisconsin Democrats say, if successful, would eliminate protections for people living with pre-existing conditions.

Democrats say an ACA repeal would also undo a provision that keeps young people on their parents’ insurance until they're 26 years old.

Just this week, U.S. Senate Majority Leader Mitch McConnell of Kentucky said he would consider another attempt to repeal the ACA.

Asked if she would cast the deciding vote for a repeal, Vukmir said, "Obamacare needs to go."

Still, Vukmir said under no circumstances would she allow those with pre-existing conditions to lose protections.

Baldwin has been a staunch supporter of Medicare for All, a proposal backed by U.S. Sen. Bernie Sanders of Vermont that looks to create a single-payer national health care system. Some estimates suggest the plan would cost $32 trillion over 10 years.

Asked about how this sort of system would be funded, Baldwin said it should be debated, as could other innovative ideas, and that this plan would still be less costly.

"She has no plan for how to pay for it," Vukmir said.

This week, it was reported the federal deficit totaled $779 billion for the last year and the national debt is now $22 trillion.

"We've been balancing our budgets in Madison, but they haven't been doing it in Washington," said Vukmir, adding that the debt isn't sustainable. She suggested eliminating duplication of services at the federal and state levels and bringing the money back to the states. She suggested a balanced budget amendment and restoring spending caps.

Baldwin attributed the 17-percent jump in the deficit to the GOP tax cuts passed this year and proposed eliminating tax loopholes for corporations.

Vukmir said she supports Trump’s plan to build a wall along the country’s southern border and efforts to curb illegal immigration.

"We need to have people who are willing to stand with the president in sealing that border once and for all," she said. "Sen. Baldwin wants open borders."

Baldwin disagreed with the assessment.

Should there be serious sanctions against Saudi Arabia for the apparent killing of United States resident and journalist Jamal Khashoggi?

She defined a serious response as canceling munitions and aircraft deals with Saudi Arabia.

Vukmir was less firm in terms of her response, describing the region as a complex part of the world. She said she would support Trump's decision on sanctions, one way or the other, once he has all information on the Khashoggi case.

As far as the U.S.'s almost two-decades-long presence in Afghanistan, Vukmir said, "If there are safe havens, places where terrorists are training and plotting, then it is in our national security interest to make sure that we maintain a presence. And that applies to Afghanistan or anywhere else."

Baldwin said she voted to use authorized use of force in Afghanistan after the Sept. 11, 2001 terrorist attacks, while she was in the U.S. House and that it was a narrow mission.

"This is not year two of the war in Afghanistan. This is the beginning of year 18 and I cannot imagine anything that we're going to be doing differently in year 18 that justifies keeping our troops there," said Baldwin. "I believe our troops should come home."

When it comes to NATO, Baldwin said she believed the Senate should have to approve a U.S. exit from the alliance. She said it's a move that Trump has said he's considered because European allies weren't paying their fair share.

Vukmir said she was pleased with the pressure that Trump has placed on these countries step up.

A 2015 scandal involving inappropriate opioid prescription practices at the Tomah Veterans Affairs Medical Center has been another point of contention between the candidates and was perhaps the most heated portion of the debate Friday.

Vukmir maintains Baldwin's office sat on a 2014 report outlining these problems and lack of action led to the death of Jason Simcakoski, a 35-year old former U.S. Marine who had an overdose at Tomah, as well as others.

Baldwin denies the claims and points to the legislation that she helped pass in honor of Simcakoski, Jason's Law, bi-partisan legislation which aims to stop the overprescription of opioids.

A Q2 report by the Federal Reserve marks student debt in the U.S. at more than $1.5 trillion.

She said there should be a focus on growing the economy so that graduates could have well-paying jobs.

"What has happened now is that you’re incentivizing universities just to increase their tuitions," Vukmir said.

"I don't think the problem with student debt is government, I think it's Wall Street," said Baldwin.

She said students should be able to refinance their loans they way can with a car or a home.

Correction: The original version of this story misidentified Vukmir as a state representative instead of a state senator.