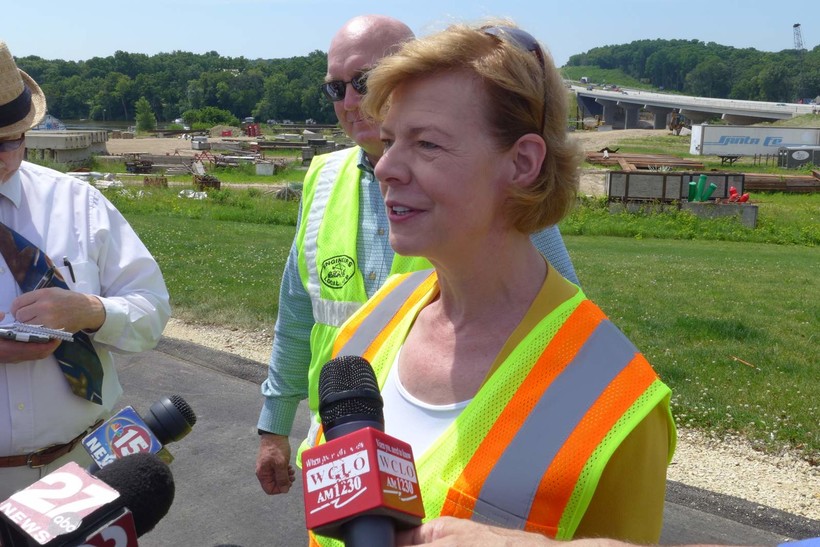 U.S. Sen. Tammy Baldwin speaks to reporters at a construction site in Edgerton on Thursday, July 6, 2017.

Baldwin told reporters at a stop in Edgerton that her first priority was stopping the Senate Republican health care bill because it would result in 22 million people losing health insurance and raise health care costs for the elderly and people with pre-existing conditions.

But Baldwin said she was looking forward to the introduction of a "Medicare for All" bill in the Senate and would likely support it.

"Well, certainly I'll look at the bill when it comes in, but I anticipate I will," she said. "It's been a long position of mine."

Baldwin voted for the Affordable Care Act as a member of the U.S. House and discussed it extensively in her first race for Senate in 2012. She faces re-election in 2018.

Baldwin was in Edgerton to tour road construction along I-39/90 and promote the $1 billion infrastructure bill unveiled by U.S. Senate Democrats earlier this year.

"I believe that the federal government really needs to step up right now, especially if you look at what we might describe as an infrastructure deficit in this country," she said.

Baldwin said Democrats should be able to work with President Donald Trump on infrastructure.

When asked whether the federal government should let Wisconsin add tolls to its interstate highways, Baldwin said she wanted there to be a consensus first.

"I've certainly had those discussions here and there with individual state legislators, but if that's something the state wants, they're going to have to speak with one voice," Baldwin said.