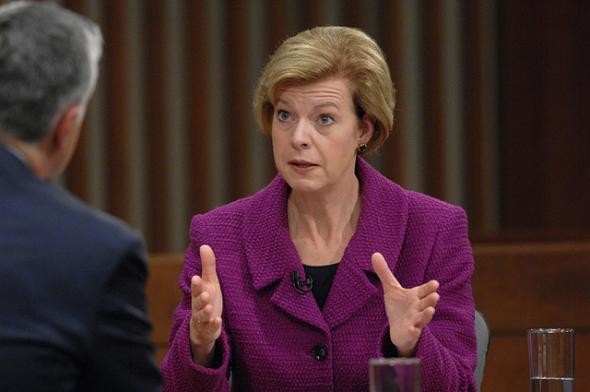 U.S. Sen. Tammy Baldwin is calling for closing corporate tax loopholes after Wisconsin-based company Johnson Controls announced that it will merge with an overseas firm.

Johnson Controls, the state’s largest public company, announced last week that it will merge with Tyco International. The new firm will maintain its operational headquarters in Milwaukee, but its legal global headquarters will move to Ireland. The change of address is expected to result in a loss of roughly $150 million annually to U.S. coffers, and save both companies about $500 million in the first three years.

The merger is known as a corporate inversion, which Baldwin called a "fancy phrase for moving your headquarters to take advantage of tax loopholes that allow you not to pay U.S. corporate taxes."

"Corporate tax inversions are a perfect example of how the game is rigged and why we need tax reform that focuses on rewarding work instead of just wealth," Baldwin said.

The junior senator from Wisconsin said she's concerned over companies ridding themselves of U.S. tax obligations because it's not fair to everyday taxpayers.

"It means that tax dollars that provide tax credits for research and development or investments in transportation infrastructure, things that these companies rely on, the burden is going to have to be shouldered by individual taxpayers and other corporations that remain headquartered in the U.S.," Baldwin said.

U.S. Sen. Ron Johnson said the inversion is an indication that lawmakers should lower federal corporate tax rates, which he argued would take away the incentive for companies to move their headquarters out of the country.

While Baldwin supports changing U.S. tax codes, she said she's interested in reforms that will "bring greater fairness within the U.S. tax system that rewards work, not just wealth, and demands that everyone do their fair share for the investments that we want to make."

Baldwin expressed hope that her congressional colleagues will close tax loopholes by passing the legislation and bring greater scrutiny to corporate inversions.