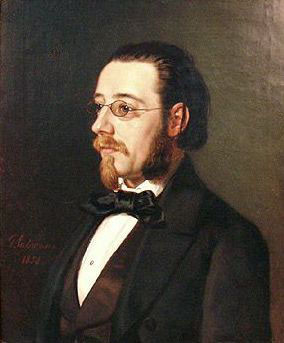 Between the high cost of living in Sweden and supporting his wife back in Prague, BedÍich Smetana found it necessary to add to his income as the director of a music school in Göteborg, and so he accepted an invitation to become the conductor of the Göteborg Society for Practicing Classical Choral Music. The society soon joined forces with the languishing Harmonic Society, and the merger gave Smetana the chance to broaden his experience as a conductor.

Broadening the musical tastes of his musicians and audiences would not be so easy.

Smetana’s homesickness was alleviated by a fellow Czech named Josef Czapek who had been conductor of the instrumental section of the Harmonic Society and he took over the leadership of the combined instrumental forces while Smetana took responsibility for the choral section.

After weeks of nervous tension and exertion that left Smetana sick, the first concert turned out to be a success. But Smetana came to the conclusion that he was working in a cultural backwater. To Franz Liszt, the financial backer of his music school, he complained that the musical inclinations of the locals were far behind the times. “Mozart is their idol, but not yet understood,” he wrote. “Beethoven is feared, Mendelssohn declared indigestible, and newer composers are unknown!”

He added, “You can scarcely imagine what it’s like to prepare a score with singers who are untrained or amateur, with runaway soloists, and an orchestra made up partly of unpracticed dilettantes and partly of the military.”

Smetana’s conducting was hampered all the more by his limited command of Swedish and his quick temper.

And yet, at the end of his three years in Göteborg, as he prepared to return to Prague, his students showered him with such gratitude and affection that he wrote in his diary, “I was so deeply moved that I could only express my thanks in a few words.”