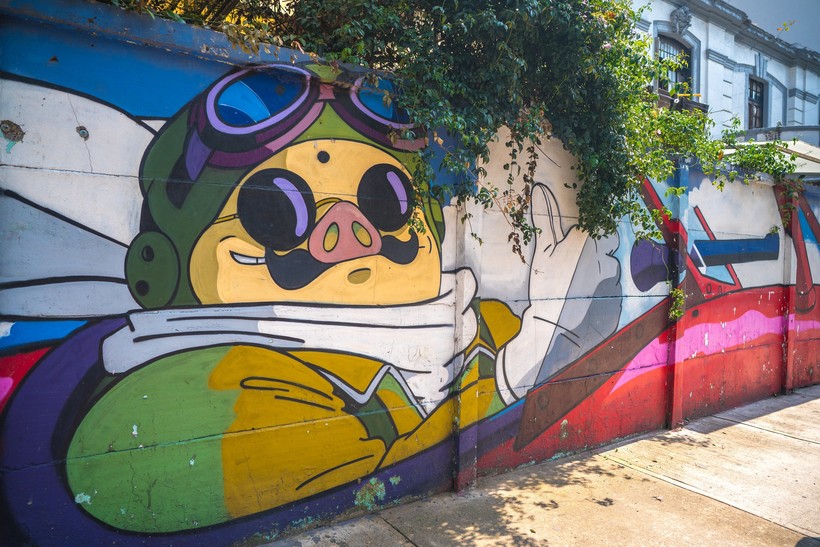 Susan Napier Explains The Ideas That Go Into The Japanese Filmmaker's 'Miyazakiworld'
By Doug Gordon
Share:

Hayao Mizaki is one of the greatest living animators. His movies, which include the Academy Award-winning "Spirited Away," "Princess Mononoke," and "Howl's Moving Castle," feature rich and dense cinematic universes populated by such memorable characters as a red-haired fish girl and a furry woodland spirit.

Susan Napier knows all about Miyazki's life and films. She's the Goldwaite Professor of Rhetoric and Japanese Studies at Tufts University and the author of "Miyazakiworld: A Life in Art."

"I first saw a Miyazaki film in 1990 — "Nausicaä of the Valley of the Wind," which is from 1984. It's one of his earliest films," Napier told Steve Gotcher of WPR's "BETA."  "It is an extraordinary, beautiful film. The imagery is remarkable. And the characters are ... still really more complex, more interesting, deeper than most characters you will see even at a Hollywood movie."

"In Nausicaä, I think Miyazaki really created a person who is passionate and full of desire to change the world and ameliorate it, but can get frustrated. And we see Nausicaä changing. And I think that's why she embodies so much of Miyazaki, his own ego, because she is passionate about everything. Also, she's a scientist. She's a good swordswoman. She has a laboratory down at the bottom of her castle where she works to find ways to help the post-apocalyptic wasteland revive. And that's very much what I think of as Miyazaki, someone who's really trying to help things."

Sometimes people tell Napier that they thought Miyazaki was just a kind, cuddly person who made kind, cuddly, feel-good movies. But Napier says there's more to Miyazaki and his movies.

"They are movies that that make you feel good, I believe, or even sometimes transcendent because they do speak of joy and hope, absolutely. But also, they do deal with the challenges and dark sides of living in the world that we're in," she said.

Miyazaki was born in 1941. And as Napier writes in her book, Miyazaki's grandfather, father, and uncle profited from World War II by running a factory that made fan belts for fighter planes. Napier identifies a pivotal moment in his childhood when Miyazaki was 4, and an air raid destroyed his neighborhood.

Miyazaki and his family were riding in a van through streets bursting with flames in the wake of huge civilian air strikes. As Miyazaki told his biographer, he remembers a neighbor with her baby asking if they could ride with them in the van. The adults looked at each other and told the woman that they were sorry but they just didn't have any more room in the van. Miyazaki said that he'd like to think that if he and his brother had been stronger, they would have spoken up and said that they could do something to other people escape.

Napier describes this as "an extraordinary moment because you see him revisiting it in so many ways in his films. Throughout his work, you have these very strong, resilient, smart children who say 'No, I'm not going to accept what's awful going on here. I will try to change things. I will resist.' And, of course, this is also Miyazaki himself, but he dreams of these little kids as changing the world in a very positive way."

Napier came up with "Miyazakiworld" as the title of her book because she kept referring to him as a world builder. She also said that there's an overall message that Miyazaki is trying to convey with his films. He's critical of our own world and raises questions about whether or not we have to live the way we do. Napier points to "Nausicaä of the Valley of the Wind" as an example of that kind of Miyazaki message, with its "lovely society that manages to survive without using war and really heavy-duty technology."

"And just generally the way people interact in "Miyazakiworld, there are almost no villains," Napier explained. "This is something that American audiences find very, very difficult sometimes to process because they keep wanting to see who's a bad guy, you know, who's the bad guy, who's a good guy, because the world of Miyazaki is not a clear-cut place. It's not obvious who's good, who's bad. People are shaded. People are complex."

Napier describes Miyazaki as "a filmmaker whose legacy will include visions of catastrophe, of apocalypse, of war, of darkness and trauma," who at the same time "insists on showing some kind of heart of light that continues to glow in his movies."

Napier highlighted a quote from the last scene of the manga version of "Nausicaä of the Valley of the Wind," where Nausicaä is arguing with a creature called The Master of the Crypt.