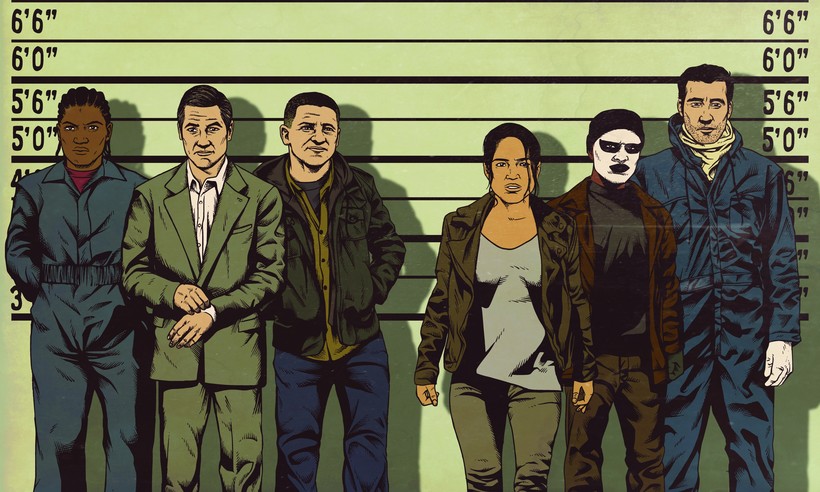 The New York Times Bestseller Is Back With Another Sequel To His Hit Pop Culture Canon
By Adam Friedrich
Share:

Born in San Antonio, Texas, the teacher-turned-journalist was finding his niche at the Houston Press and LA Weekly when Bill Simmons — founder of two of the nation’s most popular sports and pop culture websites — discovered Serrano’s unconventional work and hired him to write for ESPN’s Grantland in 2015.

"Imagine you have this very powerful figure, in this industry where everybody looks up to him, and he decides he’s going to reach down and he’s going to grab you and he’s just going to pick you up into the air and celebrate you in front of everybody," Serrano tells WPR’s "BETA" of the life changing development. "Bill showed up and nothing has been the same since."

The following year, after Simmons’ fallout with ESPN, Serrano would be one of the few handpicked writer/editors to follow Simmons to his new site, The Ringer. The exposure offered Serrano a platform for his trademark takes on rap, basketball, film and TV.

"I’m not approaching stuff any differently than I was before Bill showed up," Serrano stated. However, he admits that more people now take his work seriously and find it valuable.

The newfound creative capital also allowed Serrano to release a series of innovative books. There was "The Rap Year Book: The Most Important Rap Song From Every Year Since 1979, Discussed, Debated, and Deconstructed" — a New York Times bestseller that was announced to be adapted into a docu-series for AMC.

He followed that up with "Basketball (and Other Things): A Collection of Questions Asked, Answered, Illustrated" which also snagged a spot on the New York Times bestseller list, but made a bigger splash as one of former President Barack Obama’s favorite reads of 2017.

Now, Serrano has tackled film in his third book with his New York Times bestseller, "Movies (And Other Things)." The book is a series of cinematic thought experiments that explore whimsical and provoking questions from (recent) movie history.

For instance, Serrano ponders if adding superstar Dwayne "The Rock" Johnson to popular movies makes them better, worse or the same. At first glance, it seems like a silly premise that actually speaks to the current climate of celebrity.

"It’s supposed to be some sort of commentary on The Rock creating for himself a global stardom that doesn’t exist anymore," said Serrano. "He was able to achieve that and the way he was able to do it, is he just decided 'you know what, I’m going to be in every single thing.'"

Yup, read this last week. Great stuff. Mahalo Shea 🤙🏾 and the answer is hell to the yes

Serrano also painstakingly digs through the last 25 years of Oscar winners to reshuffle some of the more questionable winners and reward some of the unjustifiable snubs in a section he calls, "The Brand New Academy Awards."

"My biggest takeaway from this experience is that the Oscars gets a lot of stuff wrong," Serrano quipped. "Even the people who are supposed to know more than everybody else screw up a whole bunch of times."

Additionally, Serrano had fun weighing which action star/tough guy is the best dog owner, what movie villain would you love to hang out with, and was Andy Dufresne’s time in Shawshank prison worth it once you adjust his embezzled funds for inflation.

"Was his time in prison worth it?" Serrano questioned. "Because that money back then translated to now is like a couple million dollars."

While most of the chapters are simply fun, others scratch at larger societal issues ("Did Denzel’s race-forward football camp work or not?" and "Which race was white-saviored the best by Kevin Costner?") and others are deeply personal for Serrano.

Take, for instance, his unique form to identify the best gangster movie scene in film history, where Serrano stages a three chapter draft (armed with a few guide rules so "Goodfellas" and Robert De Niro don’t dominate the exercise). Serrano lands on a scene from "A Bronx Tale," a film about a son torn between the local gangster and his bus driving, workingman father, played by (surprise, surprise) Robert De Niro.

"I have a very similar relationship with my father — also he’s a bus driver. He’s being doing it for 30 plus years in San Antonino," said Serrano. "These pieces fit here, it touches me."

Likewise, Serrano — whose own life story is being adapted for an ABC sitcom from "Parks and Recreation" and "The Good Place's" Michael Schur — displays an affinity for the 1997 Jennifer Lopez vehicle, Selena. He talks about how it was the only film he can remember that represents the Mexican American experience he went through as a child.

Serrano keys in on a particular scene where Lopez’s character, singing sensation Selena, and her brother want Selena to perform in Mexico, but their father outlines why that would be tough.

Wisconsin Breaks Record Of Daily Positive Cases For Third Day In Less Than A Week
In A Change From 2016 Stance, Ron Johnson Favors Vote On SCOTUS Nominee
Gov. Tony Evers Fires Workforce Department Head Amid Continued Unemployment Backlog
Wisconsin Tops 2,000 COVID-19 Cases For Third Straight Day
What To Do If Someone In Your House Is Asked To Quarantine Or Tests Positive