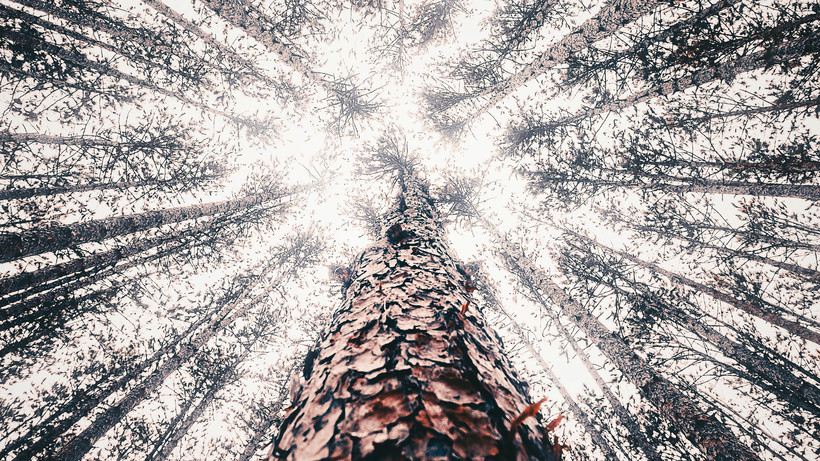 An Author Marvels At The Inner Life Of Trees

Richard Powers On Why He Feels Trees Deserve To Be Complete Characters In 'The Overstory'
By Steve Paulson
Share:

You wouldn’t think a novel about trees would become a major literary event. But Richard Powers' "The Overstory" is overturning a lot of conventional thinking. It’s been called "visionary" and "monumental." And though human characters shape the plot of this 500-page epic, the real heroes are trees.

We discover trees are social beings that talk to each other and form alliances with other trees, even other species. In fact, whole forests can exist as a kind of superorganism.

Powers tells the stories of nine people — scientists and environmental activists — but he keeps returning to the trees themselves. In fact, the novel’s structure is shaped like a huge, sprawling tree, stretching from root to crown. Powers is no stranger to tackling complex science subjects. His previous novels have delved into such topics as genetics, artificial intelligence and virtual reality. He is also the winner of a National Book Award and a MacArthur "genius grant."

For "The Overstory," Powers did a prodigious amount of research. He told "To the Best of our Knowledge" host Steve Paulson that he read more than 100 books — everything from field guides and popular treatments of trees to more scientific, more esoteric books. He calls the five years he spent reading and writing this book "one of the happiest periods of my life."

Richard Powers: It's interesting that you said how much easier animal empathy identification is. Of course, that's the way we've been shaped by natural selection — to be extremely sensitive to things that look like us. That empathy is only grudgingly given outwards beyond the circle of the human. And I thought if we really want to get to the heart of why we feel so alone here — what psychologists call "species loneliness" — that we should take the problem directly in hand and say, "What would it take for a human being like me to look at a tree and say, 'I will give this the sanctity that I ordinarily only give to my own kind'?"

SP: Was it your goal to create empathy for trees?

RP: I think it was the goal of the book. I would also call it a necessary first step for whatever transformation is going to be required of us to live stably on this earth. Originally I thought it would be marvelous to try to write a novel where the trees themselves were the characters. That's a bit of a technical challenge.

RP: The Ents were a great source of inspiration for me. Slow to anger, slow to act, but when they do, you want them on your side.

SP: You did a ton of research for this book. What did you find most surprising about the science of trees?

RP: I didn't know much about it before I started. I had been somewhat tree blind myself for most of my life. Trees are social, they have memory, they talk to each other. They do so over the air and they do so underground. A tree that's been attacked by insects, for instance, produces its own insecticides. In this profusion of chemicals that the tree produces under attack are substances that go out over the air and are detected by nearby trees.

SP: So they're telling other trees, "Watch out. I've been attacked by insects, so you better get ready"?

RP: Yeah. There are people who have compared this to a kind of shared immune system. That's stunning to think that natural selection has brought together this chemical mechanism that makes a forest a kind of superorganism.

A tree can produce chemical signals that call in an air force that can alert another kind of insect to come and prey on the ones that are feeding. And then the underground communication is truly mind blowing: fungus and trees form symbiotic, mutually beneficial relationships between themselves.

It gets even crazier. Some of these funguses make little nooses out of their filaments, with which they trap invertebrates in the ground. They digest these animals and feed the nutrients back into the tree. And the fungus can connect trees at great distances, and in fact can connect trees of different species. It's astonishing.

SP: It sounds like you're talking about "tree intelligence." Is that a word we can use?

RP: It's a word I have become increasingly comfortable using, and it's a word that pretty upstanding scientists have begun to think about. Even more conservative scientists have to step back from that word "intelligence" and say, if we mean by intelligence flexible, non-deterministic behavior in the face of a changing environment – appropriate supple behavior, sensing, engaging and responding accordingly — trees are doing that.

SP: Some trees live incredibly long lives — hundreds or even thousands of years. I can't even fathom this.

RP: The oldest continuous single organism trees — many people cite the bristlecone pine — would be upward of (5,000) or 6,000 years. There's a celebrated tree in Norway that's been dying and resurrecting for over 9,000 years. Basal sprouts from that root mass have been coming back since the Ice Age. The great groves of Aspen are all growing clonally out of the same root mass, which is on the order of 100,000 years old.

SP: There is a long history of animist cultures where pre-modern people have really believed that trees are spiritual beings. You strike me as a pretty hard-headed science guy, but I'm wondering if you've ever inhabited this kind of animist worldview.

RP: "The Overstory" is in many ways an attempt to bring that hard-headed science into an intersection with the kinds of truths that older stories — animist stories, pantheist stories — once told. This was the eye-opening challenge that I was trying to respond to in putting this novel together.

We're now living in an age that's dispensed with a lot of these old myths that seem primitive, superstitious, pre-scientific — but in fact, in dispensing with the things that are embodied in those myths and retreating into a hard-headed rational empirical approach to the world, that frame of mind unites with the culture of individualism, a culture of commodity, where we adopt this idea that meaning somehow can only be a personal thing.

If we live in this culture where the only source of meaning is what you can make for yourself, then we're going to have a kind of literature that doesn't travel very far beyond either the psychological crises of individual people trying to come to terms with their own conflicted interior ambivalence, or the literature of the sociological or political.

SP: You're basically saying that the contemporary novel really does not know how to write about the natural world. It's too much, too overwhelming.

RP: I'm saying the contemporary literary novel has forgotten a third kind of dramatic conflict, which used to be at the heart and soul of most stories that we told ourselves. Not a person against their own self, or people against each other, but the hopes and fears and dreams of the entire human race trying to come to terms with all of the things that non-humans want.

SP: One of my takeaways from your book is that once you really know this science and understand how amazing trees are, you can't look at the world in the same way anymore. And there are ethical implications — most obviously, problems with logging old growth forests, but it seems to go much further. Did this change your life in any way?

I'm living in a new place because of this book. I moved my life to another part of the country. I kept reading about old growth forests, and how phenomenally different it is to walk into an old growth forest compared to the 98 percent of the wooded area of the country which is regrowth. And I kept reading about these spectacular extant pockets of old growth eastern forest in the Smoky Mountains. Three years ago, I decided to have a deeper look into these patches of uncut forests. And my jaw just kept dropping. I just thought, "This is my country."

SP: So you moved to the Great Smoky Mountains?

RP: I did. It just got under my skin, I couldn't stop thinking about it. So a year later, I bought a house on the edge of the park and I've been living there for two years ever since. I will continue to live there into the foreseeable future.